Hi everyone,
I was wondering if there is a way to create your own bread flour blend without using AP flour and vital wheat gluten? I have a variety of whole grains that I can mill, I’m just wondering what would be a good combination? I would rather be able to make my own instead of continuing to buy it, since it seems from other comments it’s getting harder to find. Thanks.

After months of waiting, I just confirmed that my Mockmill will ship to me next week.

Out of all of the different wheat berries, which wheat berry would you recommend to someone new to flour milling to make a basic whole grain bread?

Are sprouted wheat berries more difficult to make bread with for a beginner?

My goal is to use ancient grains, but I do not know if it is a good idea to start off with them?

Also, what basic bread making equipment should I buy right away, and what should I add later?

What type of bread pan should I start with, I was thinking about a cast iron loaf pan but have no experience.

Thank you for helping a novice grain miller and bread maker!!

@bekisnl and @sweetjennigirl56 A good place to start reading is here 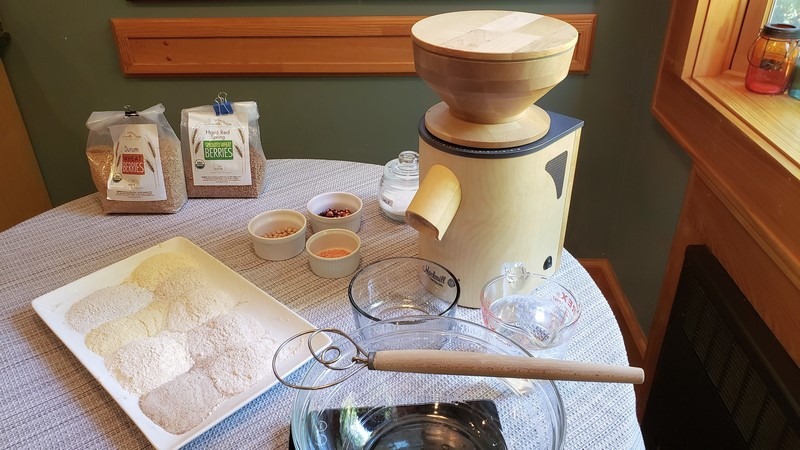 Home Milling with my Mockmill

Milling whole grains in my Mockmill meshes perfectly with my three intertwining goals as a baker/cook: great flavor, high nutritional value, and convenience.

Here is a thread on equipment

Must Haves for a New Home Baker Baking Techniques

Hello friends! My name is Bridget and while I’ve dabbled with baking bread in the past, I’m excited to get serious about it in the new year! I would love to hear your suggestions as to what the must haves in my kitchen are as I embark on getting my starter going and really hone in on more specific home baking techniques. What do I absolutely need at my fingertips to be a successful bread maker at home? What are your personal pro tips for home baking? What’s one piece of advice you’d give to …

In general, hard red spring wheat varieties (hard red spring wheat, turkey red, red fife, yecora rojo) are easier of use due to their gluten strength. Spelt and hard white spring wheat are also quite manageable in my experience, though spelt will crawl right off your countertop if you make the dough too wet (high extensibility).

Kamut, durum, warthog, einkorn, the emmers, rye, and the soft white wheats (soft white wheat, pima club, white sonora) are all spectacular in flavor and texture in different ways. Don’t hesitate to use them, too, but play around with ratios depending on how much loft your want in your bread.

For cakes and cookies, I lean toward the soft whites and einkorn. Emmer and red fife, too, because of the aromas they add, but with more water than the recipe might call for.

I find sprouted flour totally fine to work with – I skip the autolyse (the sugars are already more available) and keep an eye on the dough as it may ferment a little faster than you’re used to.

Here’s an assortment of 100% whole grain recipes, but if you dig around Breadtopia, you’ll find many more. You can also take a recipe that uses some bread flour, and substitute in whole grain flour and adjust the hydration of the dough upward (use more water). 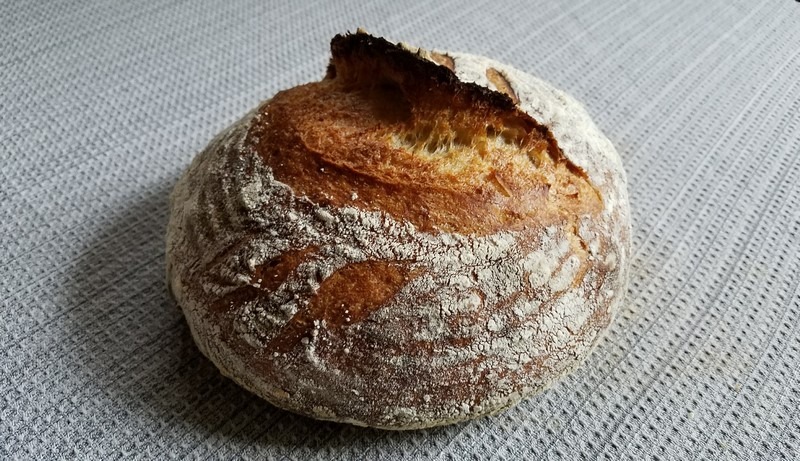 Kamut wheat is renowned for its delicious buttery, nutty flavor, and high nutritional value. It has a unique golden hue, and when combined with conventional wheat bread flour, it makes a pale, open, and airy crumb. 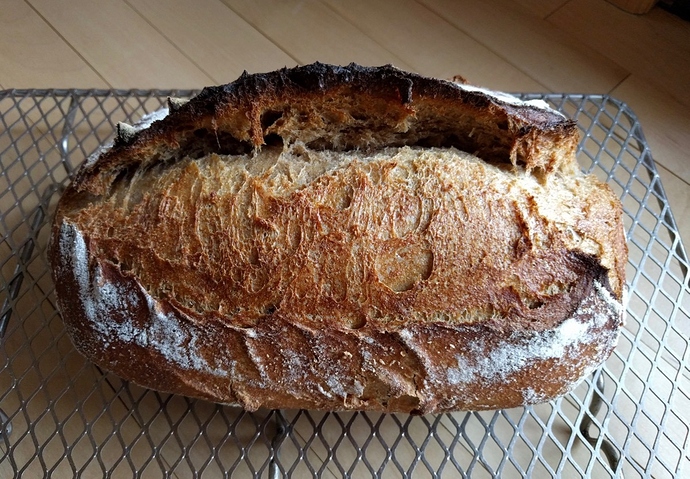 This loaf of 100% whole grain, sourdough leavened bread is the perfect daily driver for me; it's exactly what I want to experience when I make some toast or a hearty sandwich. Sliced and buttered (un-toasted), it also makes a magnificent complement... 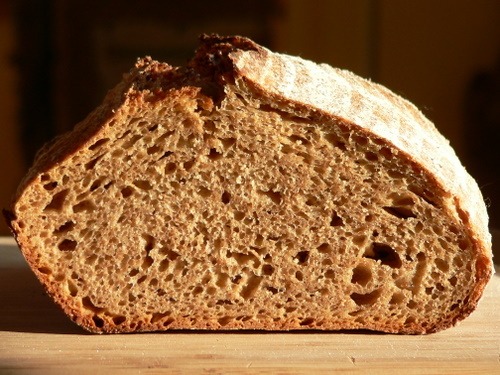 This spelt bread recipe is as delicious and easy to make as it is nutritious. So when the inspiration strikes to get virtuous with your eating habits without sacrificing sensory pleasure, give this one a whirl. 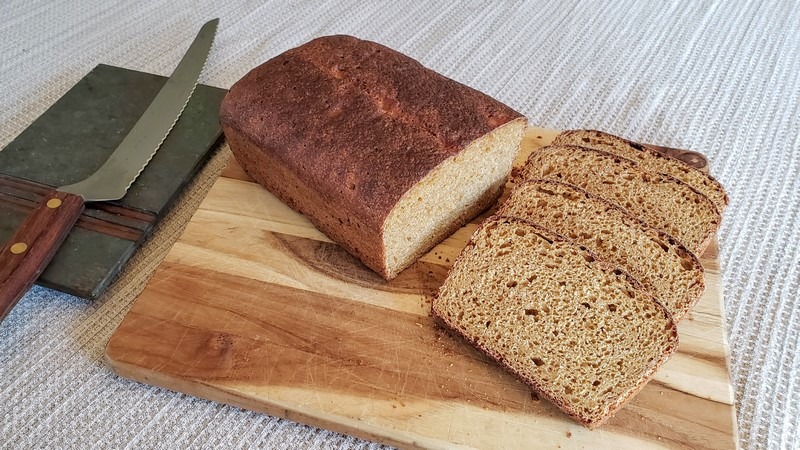 Whole grain einkorn bread is packed with flavor and nutrition. This ancient wheat is known for its digestibility by people with gluten sensitivity, but it's also loved by bread enthusiasts for its unique characteristics. 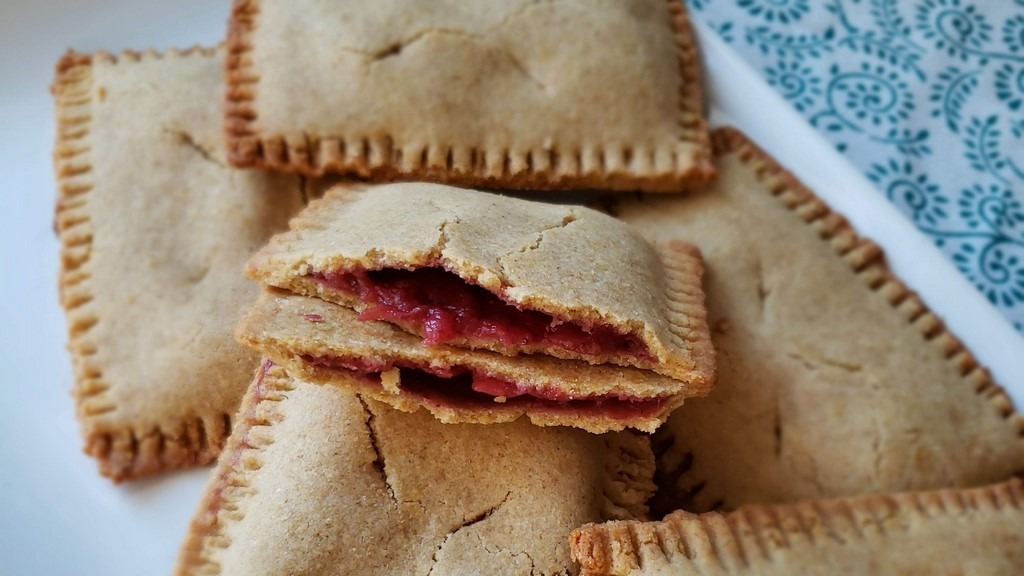 These whole grain pop tarts with strawberry-rhubarb filling are a delicious and healthier version of the Pop-Tart, an iconic American breakfast pastry that's been around since the 1960s. 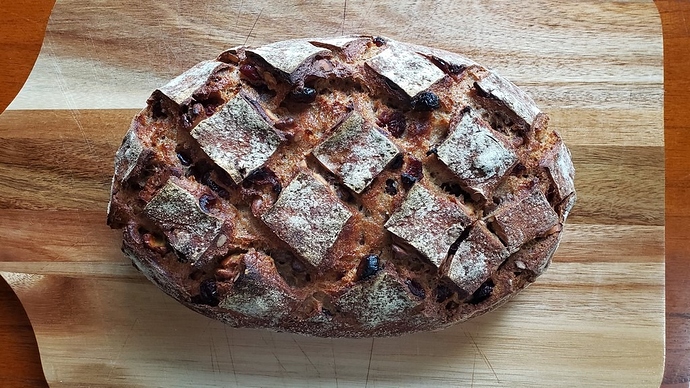 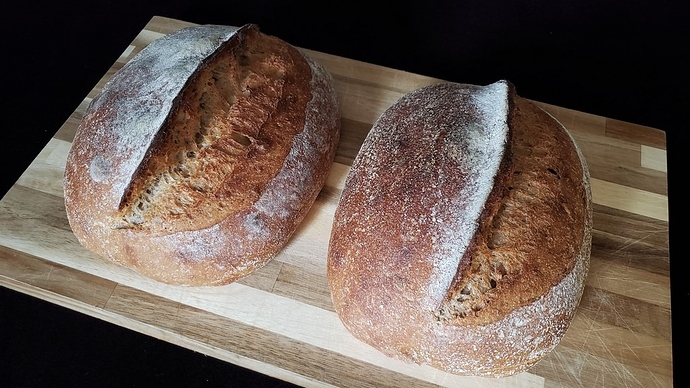 Yecora rojo is a nutty, malty wheat that tastes delicious and makes a gorgeous artisan style bread. Here are two recipes: one that uses only whole grain yecora rojo wheat flour and one that is half bread flour.

Thank You fermentada for all of the terrific information. I’m sure that it will help make my first loaves turnout much better!!

@Fermentada Melissa, you are a wealth of information!! Our forum is truly blessed by you!

Thank you Fermentia,
I too am new, 4 sour dough loaves to date. I was anxious to use various wheat flours & thus have struggled with the hydration levels and dough rise. I believe I need to get a few more white loaves or 25% or less wheat under my belt before experimenting more.
Thanks to Breadtopia’s videos my knowledge ‘of feeling’ the dough has improved and got me out of some sliding disasters.
I was wondering if there was an article enlightening the different characteristics of the FLOURS, ie the water absorption rates, what blends better together & what influences taste (starter or flour).
Qualification… I live on an island, no where near where grain mills nor is grain available nor do I have a mill. When one goes shopping, one’s larder stock and resulting recipes evolve from availability on the supermarket shelves.
I have been known to buy flour that I do not understand. My first addition of 100 gems 0f Spelt was a runaway train but I managed to cook it, however although the final rise was terrific the ultimate loaf had no oven spring and actually flattened a little while cooking. Disappointing I thought I was going to have my first triumph, ha I have a lot to learn.
Any help to improve my knowledge would be appreciated.

It sounds like your spelt loaf overproofed, based on your description of big final rise and then deflating when cooking. I did this last week with spelt too actually

If you haven’t seen this forum thread, it might be interesting to you – 25% whole grain loaves with two different wheat varieties, but all else equal. Lost of photos.

Here are the photos and results of a bake where everything else is equal but Kamut vs. Sprouted Rye (fresh-milled whole grain Kamut and Sprouted Rye at 25% of the total flour weight, paired with bread flour). This casual experiment started with someone asking for the optimum ratio of ingredients for bread. Optimum is definitely an “in the eye of the beholder” thing, but I gave my optimum numbers – the formula I use when I’m just baking to bake, when I’m not interested in taking notes or using t…

Hydration is an issue even from season to season, but some flours are indeed more thirsty than others e.g. for the same dough wetness, emmer needs a lot of water and einkorn very little.

A big wheat variety characteristics blog post has been in the works for a while, and at one point it was even possibly going to be a section of our upcoming sourdough book. But the post/chart hasn’t come to fruition yet. In the meantime, here are some general ideas – but keep in mind other people may have totally different experiences!

The hard red wheats tend to have the most gluten strength. Some people perceive a slight bitterness to the bran of red wheats, especially if used exclusively in a dough, some don’t. Wheat varieties in this category, in order of gluten strength, are:

Hard white spring wheat doesn’t have the red pigment in the bran and is softer in flavor, but has fairly strong gluten strength, maybe a notch below hard red spring wheat.

Spelt and sprouted spelt have a unique gluten profile and slightly different genetics than the above wheats. Very stretchy or extensible and a nutty flavor. Same increased sweetness and speed of fermentation with the sprouted version.

Kamut and Durum are different from other wheats genetically, and somewhat similar to one another. They have a golden color and a lot of protein, but not the composition that makes for strong gluten in a dough. Both are buttery, not identical flavors though. In my experience Kamut is heavier for the volume of grain/flour. These wheats are delicious for pasta and pizza. Durum in particular is used for most commercial pasta. Semolina is a specific processing and part of the durum wheat grain.

Emmer (also called farro) is an ancestor of durum. It is on the sweet side, caramel-y and very thirsty. The gluten strength is low for both the Ethopian blue tinge emmer and regular emmer. Pasta and cookies are delicious with emmer, but do need more water if substituting for all purpose flour.

Rye is part of the wheat family but quite different in performance and flavor. It’s earthy and grassy, and it doesn’t have much gluten strength. The grain benefits from acidic fermentation conditions i.e. sourdough, not yeast, and the final breads should rest 24 hours before being cut. I make a freestanding 100% rye bread with sufficient flour for shaping and a cold final proof, but a loaf pan for support is easier.

Einkorn Often called the original wheat, einkorn has a nutty and slightly sweet flavor. Similar to rye (above) einkorn doesn’t have strong gluten, but an aerated crumb can be achieved through good fermentation. I use a loaf pan to support a dough made exclusively of einkorn.

White sonora wheat, pima club wheat, soft white wheat These wheats can be used for bread in smaller percentages of the total flour – adding softness to the crumb texture. I tend to use them for cookies and cakes with a 1:1 substitution for all purpose flour. They have more flavor, aroma, and nutrition than refined flour, but the texture of the final baked good is still on point.

Thnk you, lots of info, so much appreciated and Iwill check out the 25% wheat loaves. So appreciate your kind response, time to plan the next bake/