Why is my baguette so pale?

Can anyone help me learn why my crust came out so pale? Also, why the side toward the bottom of the loaf in the picture where the paleness becomes speckled tan is soft (might be where the two baguettes were kind of close to each other on the baking sheet?), but the pale crust is crusty and the inside is nice, one of my better efforts. I am using Trevor Wilson’s easy sourdough baguette recipe and shaping methods (as well as I can without being Trevor) except I had to put it in the frig overnight because I ran out of time the first day. What causes a pale crust? Starter was white flour and fed and healthy. Flour was 1/2 bread flour and 1/2 all-purpose. Final proof and back was on parchment on baking sheet on stone in oven with pan of water for steam the first 15 min. They puffed up nicely, just so unattractive! 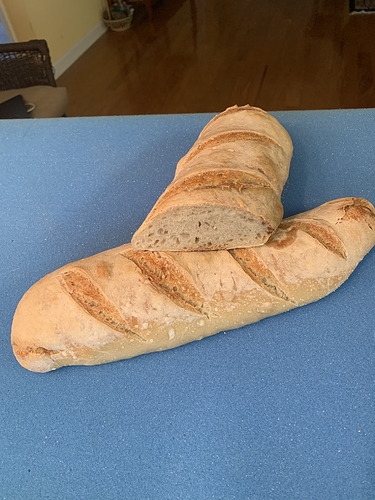 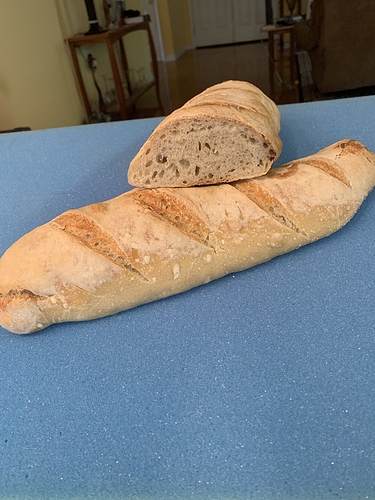 One reason why it might be pale is over fermented. A dough will bake into a lovely golden colour when sugars available caramelise when baked. If over fermented there are less available sugars to get that lovely golden crust. It could be the dough went into the fridge when optimally fermented and it carried on fermenting in the fridge. Perhaps a combination of this and your fridge being too warm to slow it down enough contributed to a more pale crust.

This can be one explanation of a few. Another could be in the baking itself. Its difficult to pinpoint without detailed analysis of the whole process with photos. Perhaps try it again and erring on the side of caution when it comes to the ferment and see what results you get.

Thank you, Abe. Your reasoning makes sense, I’ll try it again when I’m sure I won’t run out of time and have to put it in the frig. I’m practicing my dough handling and shaping skills with this recipe following Trevor’s video. I’ve made it 4 times. 2x came out beautiful golden crust, 2x came out like this. I’ve been making SD for 4 years but use little white flour, so this is a new route for me.

Thought maybe it could be the generic brand of AP flour even though it’s from Lowe’s, a pretty high end grocery store here in the southeast.

I thought maybe too much moisture. I put a damp towel over them during final proofing, then removed towel 30 min before baking to dry out the skin and make it easier to slash. Too much water and steam in the first 15 min?

Like you said, several variables. I will try with the shorter ferments.

Might be something in the baking. Not sure. Would too much water do this? Or would a dried out dough create a thick pale crust?

Have you tried toasting it? I think if you did toast it and it doesn’t brown very well then it will point to over fermented. If it does toast well then that might point to the baking.

I agree with Abe, it may be due to the baking details. I usually use steam for the first 8 - 10 minutes. Perhaps you could try reducing the steaming time and see if that helps. Do you check the internal loaf temperature when you remove your loaves? If so, what is your target temperature for removing them from the oven? I usually bake until internal temp reaches 205 F (210 F for really wet doughs). Perhaps letting them bake for slightly longer will allow more color to develop?

Last thought: Peter Reinhart mentions you can add 0.5% (Baker’s percentage) of Diastatic Barley Malt Powder to long-leavened baguettes to make more sugar available for caramelization of the crust (and more food for the hungry yeasties). I have tried this and it can give you a lovely reddish brown crust. If the other suggestions still don’t cure the issue, then it may be worth a try to get some Diastatic Malt powder online (out of stock at many places right now) and then add a small amount of malt powder to your final dough, around 0.5% of the total flour weight. You will not need much. Just note that they say you should not use more than 1% malt powder since the increased enzymatic activity will also start breaking down the gluten. Hope this helps. Happy Baking!

It didn’t toast well. Abe, thank you for your replies, and your reasoning. I learned something! Hopefully over fermenting is the problem. Yeah, Breadtopia community!

It looks like maybe there was an excess of flour on the crust and then a lot of steam early on that made it into a paste that solidified. That’s my theory since the score openings browned nicely.

Thank you for this lengthy reply. I thought about reducing steaming time, too. Internal temp I always make sure is above 205 - believe this one was almost 210. I have wanted to try the Barley Malt Powder, haven’t been able to find it locally and was too cheap to order online and pay shipping, but will break down and give that a try. Thanks, Dan.

Wow. THE Melissa responded to me! Melissa, I have looked at so many of your videos and recipes and replies, thanks so much for all you share about your many experiments and knowledge and experience. Invaluable to me! Your idea makes a lot of sense, it does look pasty, that’s a good description of the color. I had a light dusting of flour on the table for the final shaping, didn’t think it was excessive, but will try to lighten it up even more. Thanks for taking the time to help me.

I’m so happy that you’ve found my blog posts and videos helpful!

If it didn’t seem like there was a ton of flour on the baguettes after you shaped them, then maybe they dried out a little bit during the long, cold final proof. Sometimes just a bit little askew corner of plastic wrap can let in a lot of air. In that scenario, you’d probably notice some hard skin on the dough when you were scoring though.

After the night in the refrigerator I continued with Trevor’s instructions to do a preshape, let sit for 20 min or so, do final shape, place on parchment, cover with damp towel for some time. 15-30 min before baking remove towel to let a skin form so it can be scored. Maybe I left it open to the air too long to let this skin form.

I’m with Dan on your issue. The pale crust and not toasting seem to be a sign that there is little or no malt ( aka enzymes ) in the flour. Get some diastatic malt and see how it goes. It was little effect on the flavor. Some sugar will have the same effect on browning of the crust and toasting but with a small change in flavor.

I have another theory because something similar just happened to me. I think it’s in the baking plus whatever browning there was the flour prevented the rest just as @Fermentada said.

Just made a 100% durum flour loaf (Pane tipo di Altamura) and had a great idea for some mega steaming (steaming has always been an issue for my oven set-up and always thinking of ideas to get more steam). Typically for this type of bread I can get it baked with a lovely golden crust in 35-40 min. My mega steam idea worked a treat but I think I overdid it and after 40 minutes it was still completely pale and I never got that lovely aroma. It was decidedly lacking in colour and that lovely baked bread smell. I persevered and after an hour the steam had totally cleared, the crust had darkened and the aroma finally filled the kitchen. Steam delays the crust from forming, allowing full oven spring, but also the crust from caramalising. Then one takes the steam away for a nice finish. Too much steam and it will delay this even further and if you take out the loaf too early of course it won’t brown much at all.

So I think it may be in the baking. The right amount of steam for the first 15-20 minutes and not too much flour on the loaf or baguettes.

This is my result. Pale and lack lustre after the expected 35-40 minutes bake but lovely and golden after 1 hour. 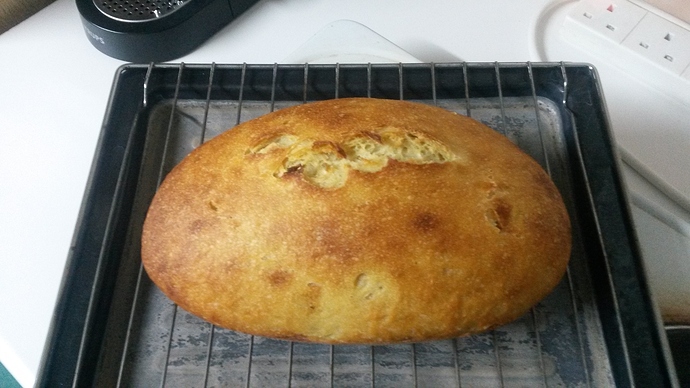 Excuse the terrible photography. Its early morning here and I should be in bed. If only this loaf hadn’t taken so long I’d be asleep by now

Glad to hear one of the experts on the Forum had the same issue!

I thought about the steam. I had a baking pan in the bottom and just poured in a bunch of water and shut the door. Took it out after 15 min per instructions. Thought maybe too much steam and now as y’all suggest combined with flour on the outside of the loaf. Although, again, I don’t recall there being much flour on them. Gonna try again.

I once tried baking in a clay baker like you cook chickens in and I pre-soaked the lid in water thinking that would provide steam. Did this side by side with my Dutch oven. When I took the two lids off - youza! Dutch oven - crusty and crackling and brown(ing). Baker - gummy and wrinkly and sickly! Happily, it firmed up enough in the final topless bake to be edible enough. Lesson: too much steam is definitely not a good thing.

So… do you have to monitor how much steam and therefore how much water you put into the pan to steam the first part of the bake? To avoid too much steam?

My next attempt will include trying to do the shaping with less flour. Maybe put just a bit more flour in the dough so it isn’t so sticky. Really tried to imitate Trevor but my dough doesn’t come out as smooth as his. I’m also considering putting in some turbinado sugar in a separate experiment to see if that helps as Brent and Dan suggest. And may bite the bullet and order some DM.

Once the steam has done its job and clears the dough can dry out and form a golden crust just like mine did (even if it did take an extra 20 minutes). Despite the steaming being in excess the dough eventually formed the nice crust given time. However the steam made your dough very wet, which isn’t too bad in itself, but it caused the excess flour on your baguettes to clump and prevent any sort of browning except where the scoring opened up. You can gently brush away the excess flour before loading the dough in the oven. I believe you could have gotten better results with your steaming method (which sounds fine) if not for the excess flour.

Believe me… I’m also learning and we share our experiences. I’m certainly no expert. Have many fair share of mistakes.

It’s really important to have some elevation on the cooling rack after removing the sourdough loaf from the Dutch oven (or similar oven container). There’s a lot of steam in that bread still, and it is continuing to cook while it cools. Be sure there’s nothing stuck to the bottom like parchment paper. Be sure not to sit the bread on anything like a towel. That loaf of bread needs lots of airflow all around it, at least until it reaches room temperature (I’d say, even longer).

I’ve jury-rigged some silly-looking contraptions to allow various kinds of breads to cool so that the crust is nice on all sides. Maybe a regular cooling rack (1" off the countertop) works for others, but it’s rarely satisfying for me.