Given that I am probably in the presence of people who actually know what they’re doing, I have been reluctant to post my latest effort on here. But this is the fourth loaf of bread I have ever made in my life; my standards are pretty low; it needs to look like bread and not kill me after eating it.

My original recipe called for 4 hours of initial proofing and 3-3 1/2 hours of second proof. That has gone out the window. My autopsy of previous victims suggested I was over-proofing the bread dough, which reduced the rising. I think I was also using too much AP flour which made the crust pretty hard, like a tortoise shell. Very difficult to cut through even with one of my work knives.

In the latest formulation I reduced the AP flour, slightly increased the Vital Wheat Gluten (as bread flour is not available), and increased the amount of starter. I also eliminated the second proofing, only doing the initial proof of 4 hours.

I had low expectations so I didn’t really knock the dough back very much or shape the loaf properly. My scoring of the top was too shallow which is probably what caused the loaf to burst a little around the bottom.

The taste is good and this should make decent garlic bread for tonight. I will probably play with the chemistry a little more and am using a starter made from a different flour (whole wheat as opposed to whole meal). That explains the tan tinge to the bread.

I had a pretty good air bubble at the top but I like this crust better; it is more flakey and cut much easier. 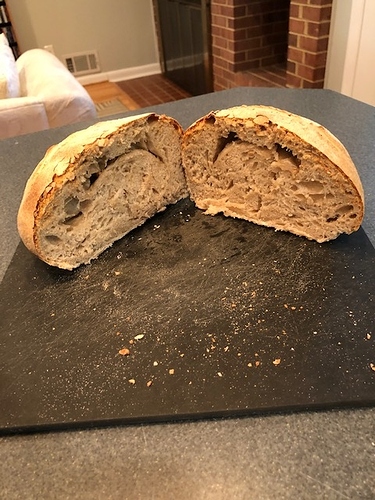 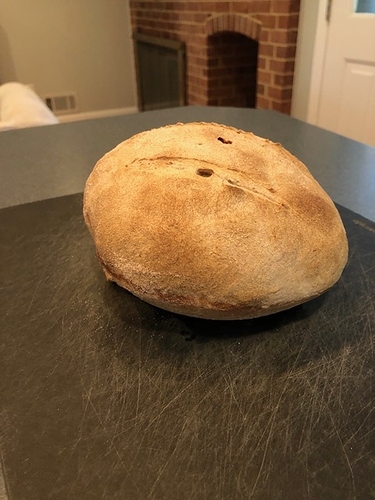 So, the quest goes on.

Keep at it. It takes a while to get a feel for it and I too ate my way through many less than perfect breads until slowly but surely things began to click. Like when a dough bulk ferments just right and you immediately know that it has done so and you have a lightbulb moment. As long as it’s tasty and you can enjoy it it’s a success. Some AP flour is fine to make bread with and no vital wheat gluten is necessary. What protein % is your AP flour?

Depending on how much starter you are using, and how vigorous it is, I would say that your first proofing – the bulk fermentation – is too short. Why not try following one of Eric’s recipes close to the letter and see what happens? In other words, use only about 60-70 grams of 100% hydration starter for about 530-550 or so grams flour. Shoot for 70% hydration, maybe 68% if you’re working with spelt or emmer, or more if you’re using whole wheat. 2% salt, of course. Then let the bread proof on the counter for 10-14 hours.

That big flattened hole on the upper part of the loaf suggests underproofing. The paleness of the loaf also suggests underproofing – not enough sugars present in the dough to result in a carmelized, browned, crunchy crust. More time fermenting will result in more sugar released from the starch, thanks to the actions of the yeasties and enzymes. Note: I am not a food scientist, so take everything I say with a grain or two of salt, but no more than 2% of the amount of flour in the dough.

First of all, that’s a fine fourth loaf. As @susanmcc99 said, it looks a bit underproofed.

I suggest that you ignore any first (initial) proofing durations that you read in a recipe because the right length of time for the first proof can (will) vary (often wildly) from one bake to another depending on all kinds of things that a recipe cannot take into account (like the temperature in your house, the specific flour you happen to be using, the activity level of your starter, etc.).

Instead, let the duration of the initial proof be determined by how much the volume of the dough expands. As @Abe said, after a while of baking you will get a feel for it, but until then, as a starting point, end your initial proof when the dough’s volume has just expanded to double its initial volume. If the mixing bowl you are using makes it hard to tell, you can use an “aliquot” - take a small amount of the dough out and put it into a small straight-sided glass or jar and put a rubber band at the level of the top of the dough sample; that should make it easy to eyeball when it’s doubled.

For the second proof, probably 3+ hours at room temperature (unless your kitchen is very cold) is going to be too long after a 2X volume first proof. I’d suggest starting at around 90 minutes and see how that works.

I wrote an article that tries to explain some of the basics of sourdough baking:

One baker's attempt to take some of the mystery out of sourdough bread baking.

Good points all. Thanks Susan

Thanks a lot. I have been shooting in the dark here without night vision! I have yet to have any of the doughs double in volume during the initial proof. They do rise, but not as much as hoped.

Unfortunately, I don’t have the ingredients to follow one of Eric’s recipes properly. I think I will go long on the bulk fermentation period until the dough actually doubles, as long as it takes. And everyone is right, there are way too many variables and you need to go with results with regard to proofing.

Paul: You and Susan are astute observers. My recipe initial proof called for 4 hours. It has been going for almost 7 now and has only risen about 50%. So clearly I am under proofing. But I am starting to see tiny bubbles in my vial of test dough so maybe things are starting to happen.

Granted, the original recipe called for strong white flour and I am forced to replicate that due to the existing shortages. What I’d really like is some King Arthur Bread flour and whole meal flour. But I’d also like a Ford GT-40 and to be 25 years younger as well. Not going to happen.
So I will keep watching and let the dough do its thing.

Thanks for the help and I will let you know what happens.

Thanks Paul for forwarding your tutorial to me.