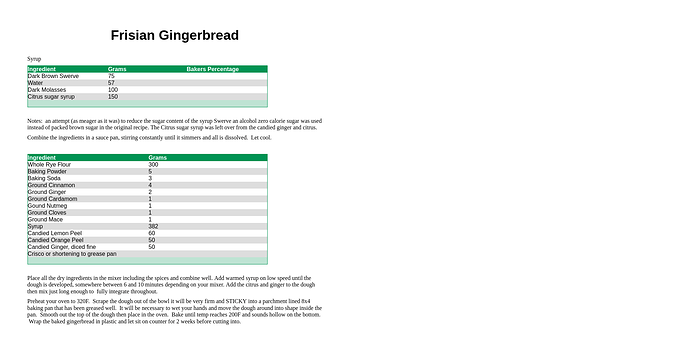 This is another rye recipe that originated in Stanley Ginsberg’s “The Rye Baker.” Again ingredients were changed to incorporate whole grain flours, the syrup was changed to reduce some of the calories and additional amounts of fruits were added.

The texture of this is solid and soft, sort of like a dense brownie, loaded with flavor and sweet. I don’t know how the original Holland Recipe “Friese Kruidkoek” Ginsberg wrote about was supposed to be like but I would not change a thing I did. I guess this is now a “BAMA” version of the North Sea area.

For those that try this I DARE YOU to eat just one piece. Don’t cut it early either as I did. It does age over a couple of weeks and get better.

As a plug for Ginsberg I have tried many of the recipes in his book and they all come out exactly as he states. The procedures he uses have become invaluable and the book is loaded with good information on Rye.