It’s ages since I posted anything. A week ago I ordered a bunch of different whole wheat berries from Breadtopia: Blue Emmer, White Sonora (a must, as pie season is upon us!), Einkorn, and Rye. After refreshing my starter, last night I whipped up the dough for a mostly Blue Emmer boule comprised of 80% Blue Emmer and 20% organic bread flour. The loaf is flattish, but it’s delicious; it might rise more if I reduce the water a bit, though the dough was very easy to handle (like spelt). The consistency is kind of like a rye bread; in fact, the dough cracked quite a bit in the oven, much the way a mostly rye dough will crack (not unattractive, in my view). It’s very, very good, and distinctive. It would/will be excellent with goat or cream cheese, as well as with butter and jam.

As I often do when making mostly whole grain bread, I followed a modified version of Eric’s whole spelt recipe posted on the tutorial & recipe page. As per that recipe I aim for 530 grams of flour and between 66%-72% hydration, sometimes more if I’m feeling daring.

I’m very pleased how well this turned out; I really wanted something with definite whole wheat flavor and nutrition, not too much bread or AP flour. 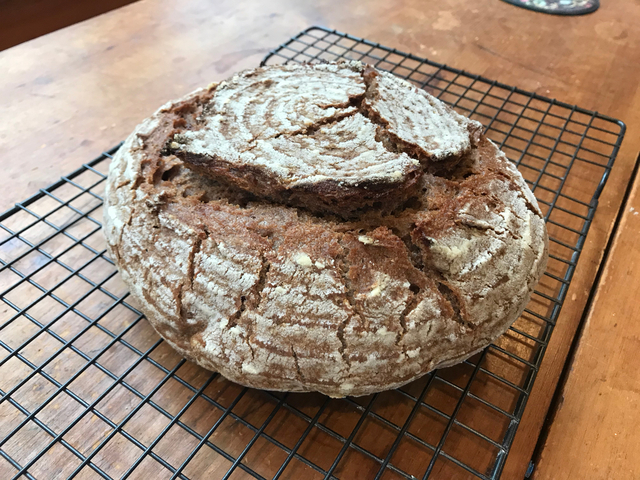 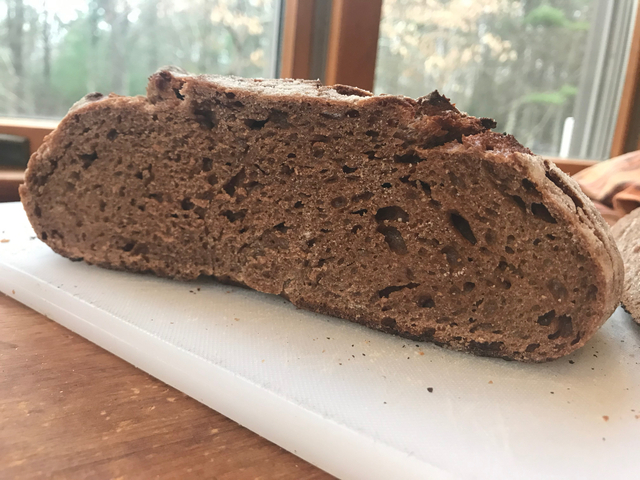 Wow that’s lovely. The blue emmer color is so deep. Thanks for sharing the recipe and method too. I’m now craving toast with goat cheese and maybe fig jam : )

Latest installment: a blue-tinge Emmer pancake. I decided to live on the edge and increase both the water content and the Emmer percentage and reduce the bread flour percentage. I initially went with 69-70% hydration (as w/version at top) and tried a one hour autolyse. The dough was so dry, plus I needed to add water to later incorporate the salt, starter, and agave, so by the time I was done mixing everything the hydration was up around 75%.

The result is very tasty but flat flat flat. Also, there’s this weird hole in the middle of the score smack in the center of the loaf. I wonder if I under-fermented the dough…I don’t think so, though, since total bulk ferment time was around 14 hours. it’s cold here, averaging around 67 in the house, though occasionally up to around 70 when the wood stove is really going.

The good news: the bread is still crusty, chewy, and delicious. It doesn’t “taste” like a brick, though it looks like one.

Next time I’ll either use the recipe I first tried (above), with 20% bread flour, or try @Fermentada’s recipe for 100% whole emmer. Or maybe 25% bread, 75% Emmer. I will also go back to the mix everything up all at once approach, a la Eric, since that has worked so well for me. 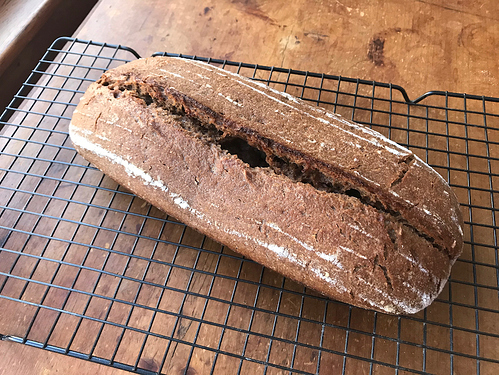 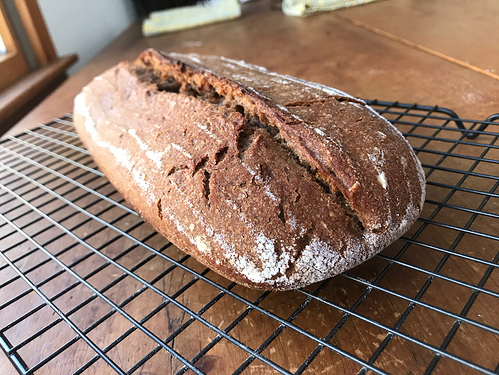 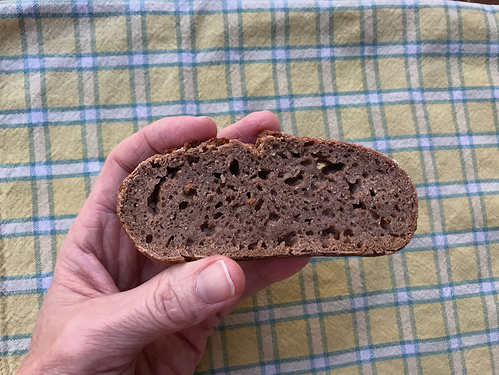 85% blue emmer, 15% bread flour. The hydration was a lot higher, which might explain some of the flatness. My 80% blue emmer wasn’t especially tall, but it was definitely taller. But it sure tastes, smells, and feels adequately fermented. It’s really good, and I’m very pleased to have discovered emmer.