I’ve been curious about the uses for diastatic barley malt powder. The uses listed for this product are not ones I bake. Would it be beneficial to get a higher rise in a simple no-knead sourdough bread that has some whole grain added (about 25-30% whole grain)? What about the rye bread which has 50% rye? Would there be a flavor impact on the breads? Is it a better choice for helping bread rise than vital wheat gluten? Are there any health or nutrition pros/cons? 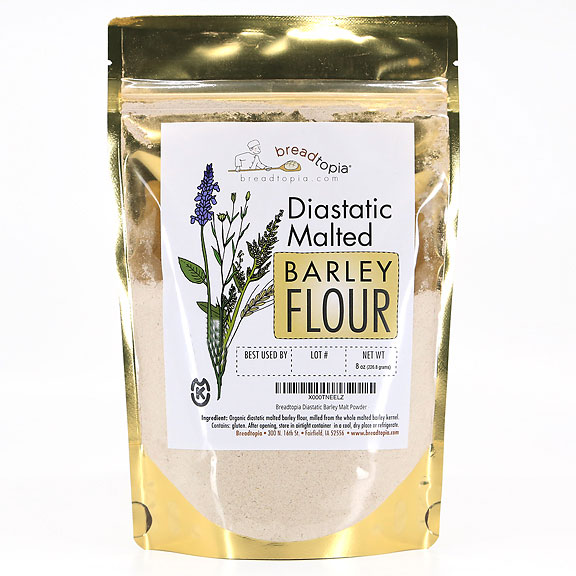 This Malted Barley Powder is 100% pure diastatic malted barley flour which has been milled from the whole malted barley kernel—the husk, endosperm and germ. Nothing else is added, no sugar or fillers of any kind.

@Abe I didn’t realize the nature of rye didn’t need the extra “help”. That’s good to know. What about adding it to other simple sourdough bread recipes I regularly bake? My husband’s special cinnamon bread that I make for him is a total white bread flour recipe and already “explodes” out of the clay baker when made so it doesn’t need the boost. But any of my other sourdough bakes that include a portion of whole grain could use a little help in their rise.

Adding it for extra rise is purely as food for the yeasts as supposed to vital wheat gluten which is added to increase the gluten. So yes, both are used for extra rise for different reasons giving the bread a boost but coming from different angles.

Rye breads will always be a close crumb with poor rise yet they have a lot of enzymatic activity but the gluten is poor. Adding diastatic malt serves no purpose so only non diastatic malt for colour and flavour.

A lot of miller’s, in the USA particularly, already add some malt to their flours. In the UK flour is exactly what it says “on the tin” - flour. And if it’s fortefied with vitamins and minerals they will write that. If we want malted flour then we buy malt flour which is bread flour with some malted grains. So unlike the USA which sells flour often with a certain percentage of malt but still sold as “flour”, we buy flour or malt flour. That is what I’ve been told by friends in the USA but if anyone else sees this please confirm or correct!

So before you go adding malt make sure non has been added already by the miller.

If your breads rise well then no real reason to add it. If you want flavour then go for barley malt syrup which is non diastatic and used for flavour only. If your flour doesn’t have malt and needs a boost then this will nudge it in the right direction. But a little goes a long way. It’s important not to overdo it as it can make breads gummy. We’re talking mere tsp (give or take) for one loaf.

@Abe Great explanation about the differences between the rising action of the barley malt powder and the vital wheat gluten! Thanks to your explanation I don’t particularly feel the need to add more vital wheat gluten now. I’m still considering the diastatic barley malt powder though. I do need a bit more information on the health/nutrition aspects though. My husband has medical/dietary concerns. I’m pleased with the flavor and color of my breads so I don’t have a particular need for the non-diastatic syrup. I’m pretty much just interested in helping boost the rise. If I do end up using the diastatic powder I will just use a smidge of it, probably starting with just 1/2 teaspoon for the whole loaf just to see how it works. The flour I use for baking my breads does not contain malted barley flour as an added ingredient.

The organic high protein bread flour that I buy from Breadtopia and use for baking my sourdough breads does NOT contain barley malt flour. That’s why I was considering added something to my breads for a boost in the rising action. The whole grain that I add into some of my breads I buy as whole berries and grind it myself as I need it so I know there’s nothing added to that either.

Yes, most all-purpose flour that is not labeled as “organic” purchased in the USA does already have malted barley flour added to it. It is listed on the ingredient label if it’s added. I do feed my sourdough, Cyril, with organic all-purpose flour because I didn’t want the malted barley flour in his “food.” I just wanted plain organic white flour for him. I have been able to get some of that I used specifically for his food. I read all labels and descriptions before purchasing.