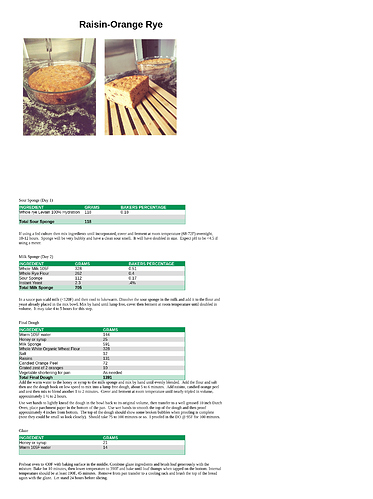 Apologize for the small screenshot but was the only way I could post as html did not work. Still having difficulties posting on this forum.

On to the recipe: Rye has a very good texture to the crumb I may have not proofed it quite long enough as the small bubbles were just starting to pop and was afraid to over-proof. It baked up similar to a cake.

We made the candied citrus and used the left over syrup as sweetener.

This recipe originated from Stanley Ginsberg’s "The Rye Baker"and then modified using whole grains and white organic flour as the basis and changing ingredients and amounts.

This was the first time I baked using a cold Dutch Oven in a pre-heated oven. I layered parchment on the bottom and greased the walls and bottom before placing the dough to proof. The lid was left on throughout the entire bake. Interesting experiment I wanted to try as was done @ King Arthur with good results.