Here’s the result of my first sourdough boule bake. It’s 80% hydration, 5% Wholemeal Rye, 15% Wholemeal Wheat and 80% Baker’s Flour. The loaves are 800g each and were cooked in a Lodge 3.2 qt Combo. There was a heap of space in the combo and I think I could easily up the loaf size.

I can’t tell you how nice it tasted. It was as good as the best sourdough I’ve ever bought and probably better. Chewy - great crust. Tender. Oh man… 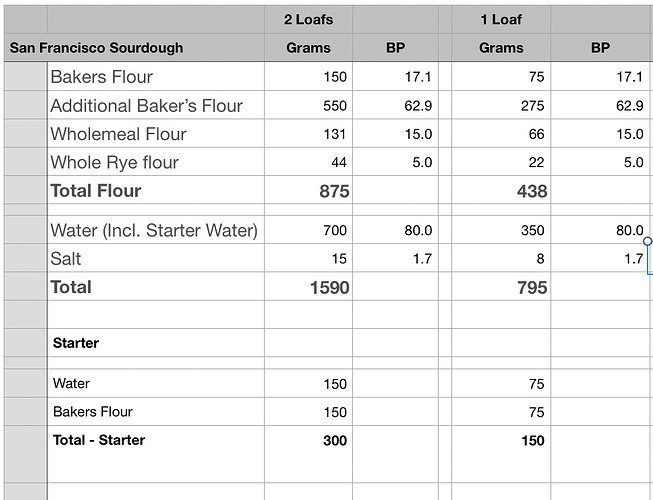 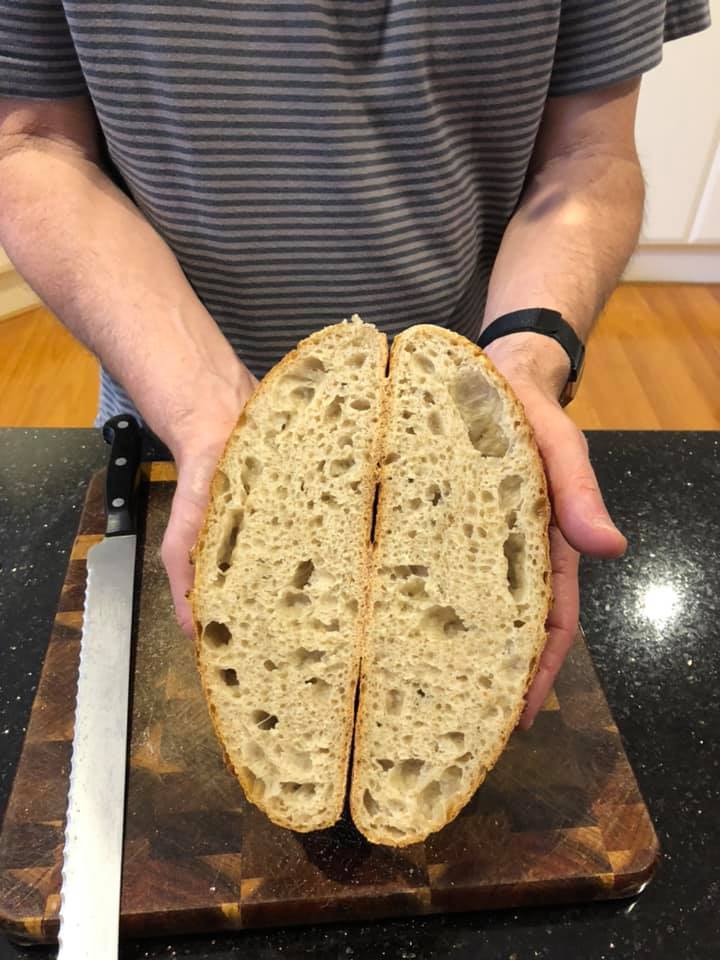 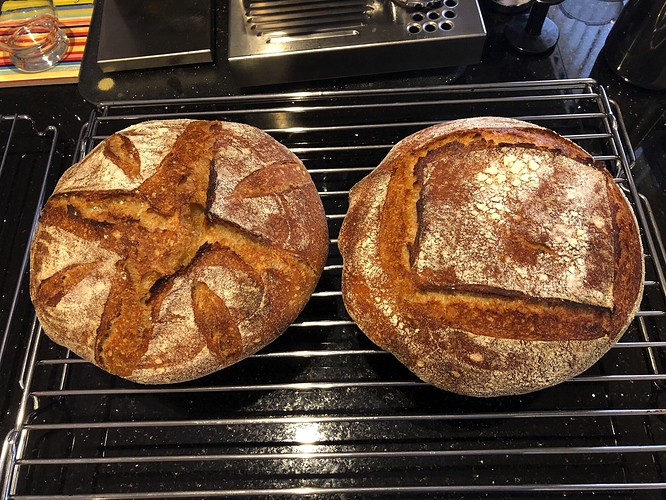 Great looking loaves. Welcome to never being satisfied with any bread you didn’t bake yourself.

They look beautiful! I also bake in the Lodge combo cooker, seems to work the best for me. Did you have any problem with the bottom overbrowning? If not, what was your oven rack placement? Thanks!

Thanks everyone - I was pretty thrilled with how it all turned out and especially the quality of how it tasted. Compared to bread rolls I make without the Combo it was like chalk and cheese. It also tasted wonderfully sour.

@Tallahassee - The bottom looked fine - not burnt at all - you can sort of see that in the side on crumb photo. I put some baking paper down. I took some shortcuts compared to what some people do. You can assess whether I do anything different. I brought the oven up to temperature (250c) with the combo in there. I didn’t wait for extra minutes for the combo to come up to the same ambient temperature - although it was very hot. My rationale is that the iron was plenty hot anyway and some people even do a cold start!

My oven comes up to temperature in about 20 or so minutes. It’s a 12 year old Miele. I turned the bottom wire rack upside down to raise it slightly. I cooked the bread in the combo for 25 mins @ 230c, removed the lid and cooked for a further 20 mins @ 220c. I checked the internal temp of the bread once on the racks and it read 205F (96c).

Thank you for your detailed reply! It was very helpful. I liked that you told me what your oven placement was. I have been baking in the middle of the oven, have not tried the lowest rack.

Welcome to the dark side! (beautiful boules, btw)

How did you do your water starter. Sorry I am a newbie.

The sourdough starter is equal parts flour and water by weight - later on you might learn there are other ratios you can use but lets keep it simple to start with and this is probably the most common method. In the spreadsheet in my original post you will see water of 150g and flour of 150g - that’s from the starter. The additional water and additional bakers flour is not starter.

You start off measuring a small amount of flour on some digital scales, adding some water of the same weight, stirring it until it’s mixed and leaving it. The next day you add the same amount again of both flour and water (ie double it). You keep doing that (doubling it) for a few days or up to a week until you start getting some natural fermentation from the yeast and bacteria in the air. It will start to bubble and you will notice that the starter rises and bubbles after you feed it. Once you have an active starter it can last for years as long as you keep it fed. You can feed it as little as once a week by feeding it, letting it activate a little and putting in straight in the fridge. If you leave it out of the fridge it needs to be fed every 8-12 hours. For a casual baker the fridge method makes more sense. You can make all sorts of things with excess starter like pancakes if you don’t want to bake bread that week.

I would recommend you do a search on youtube and you can watch someone make one. It’s actually as simple as I just described but it helps to watch I guess. Somewhere on this site there would be other threads on the topic too if you do a search. I didn’t use this site to learn about it though. I just did a lot of searches on the internet and watched a few videos. Hopefully this helps a bit - but the videos on youtube would be a lot better.

There’s quite a bit of information to absorb when you first start making sourdough bread but like anything else it’s not so bad once you know how - it’s actually pretty simple - but there’s quite a bit to know behind that “simple” if that makes sense, So I don’t get discouraged by it all and enjoy it because it’s actually fascinating.

Here’s one description of the process: 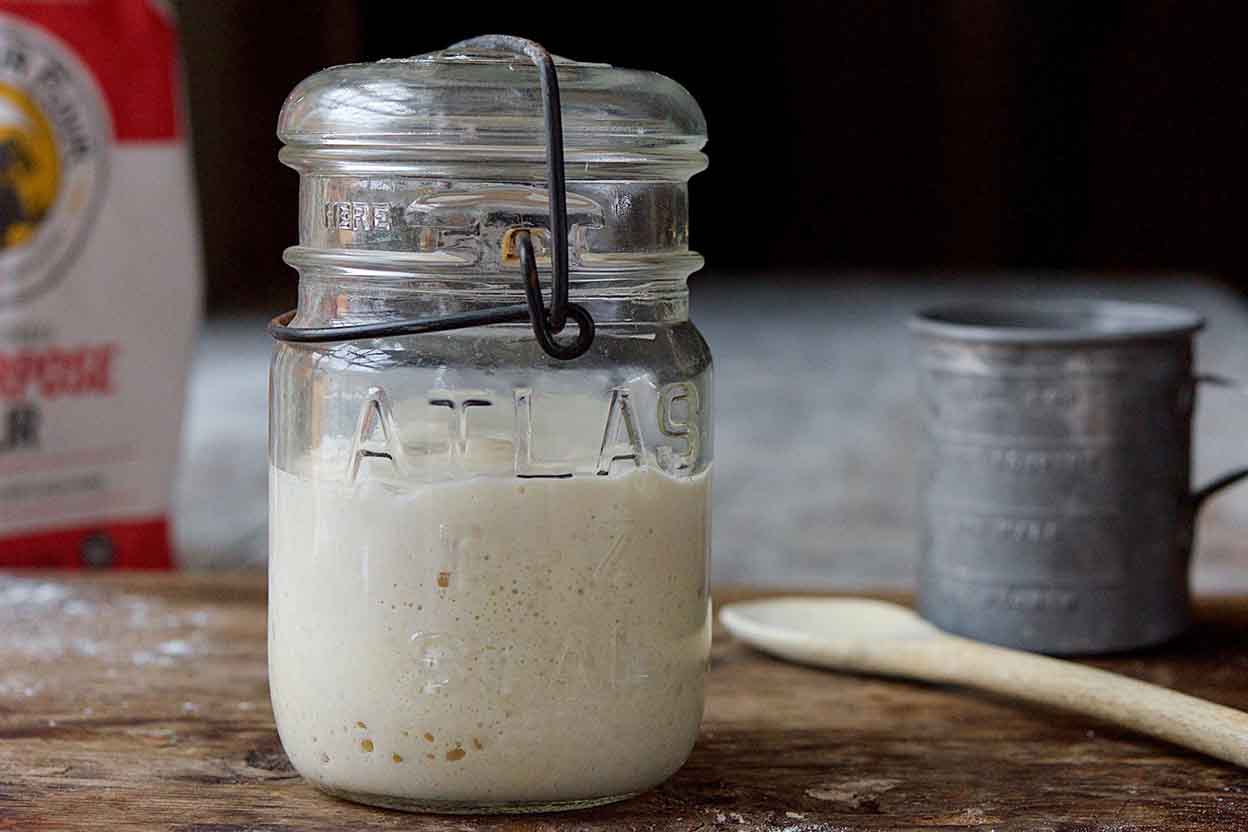 A recipe for creating your own sourdough starter.

A few videos from youtube on it (There are many more too):