Once again using my favourite sourdough pizza dough recipe, I made a Marinated Artichoke and Olive sourdough pizza. Actually I made two 9-10” pizzas tonight and will make another two tomorrow. In the past I have usually cold retarded them for 48 and 72 hours. This time I wanted to see what would happen if I cold retarded for 72 and 96 hours. Well tonight of course was the 72 hours and the dough performed as expected, very well.

I marinated a combination of artichoke hearts cut in ⅛, sliced kalamata and green olives, roasted red peppers, halved grape tomatoes, sliced peperoncini and pecorino Romano cheese. I bake my pizzas in a cast iron skillet which is perfect for a single person’s dinner. While the pizza dough comes to temperature I have the oven heating to 550ºF for 1 hour with the baking steel and cast iron skillet on the second lowest rack. After the hour of the topping marinating and the dough coming to room temperature I stretch the dough. Take the skillet out and place it on a heated burner on the stove to keep it blazing hot while I dress the pizza. The stretched dough is placed in the skillet and the pecorino cheese goes on first. I find placing something like cheese first helps keep the crust drier. Then the marinated toppings are placed on top of the cheese layer. The pizza is then baked in the oven on convection 550ºF for 8 mins turning once.

I was quite happy with these pizzas, the flavour was great. I think I would add a thinly sliced shallot next time. 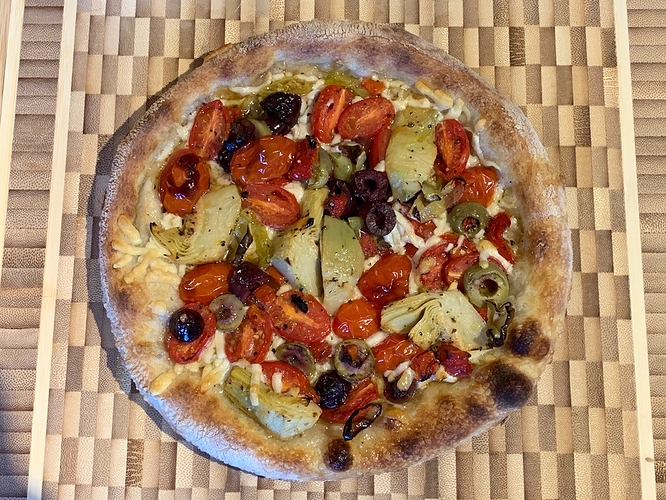 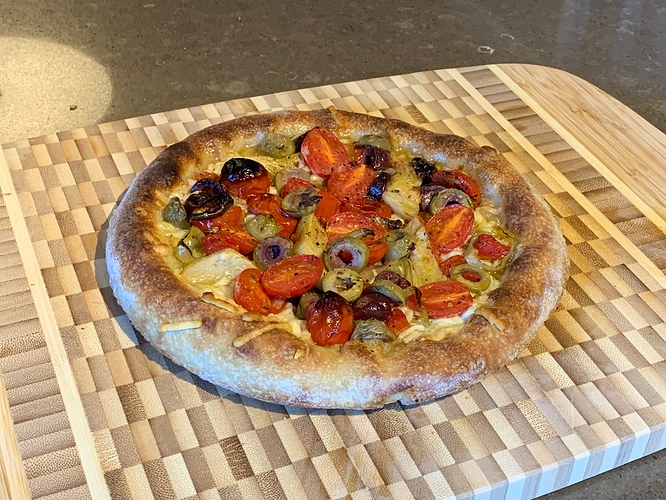 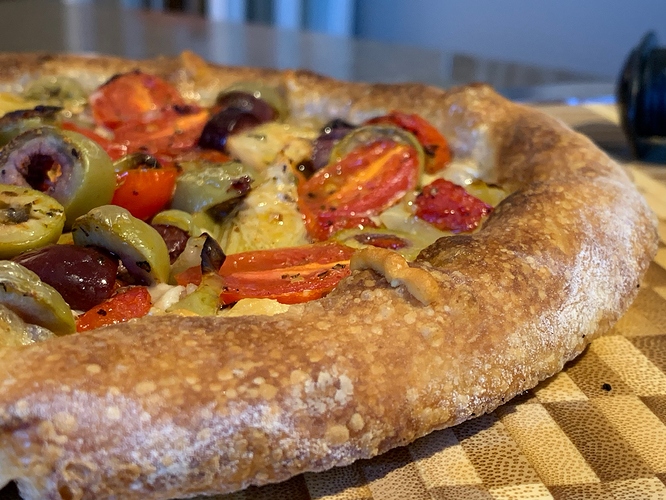 Sometimes you just want a pizza loaded with vegetables. Yours looks perfect. All the vegetables I’d choose. 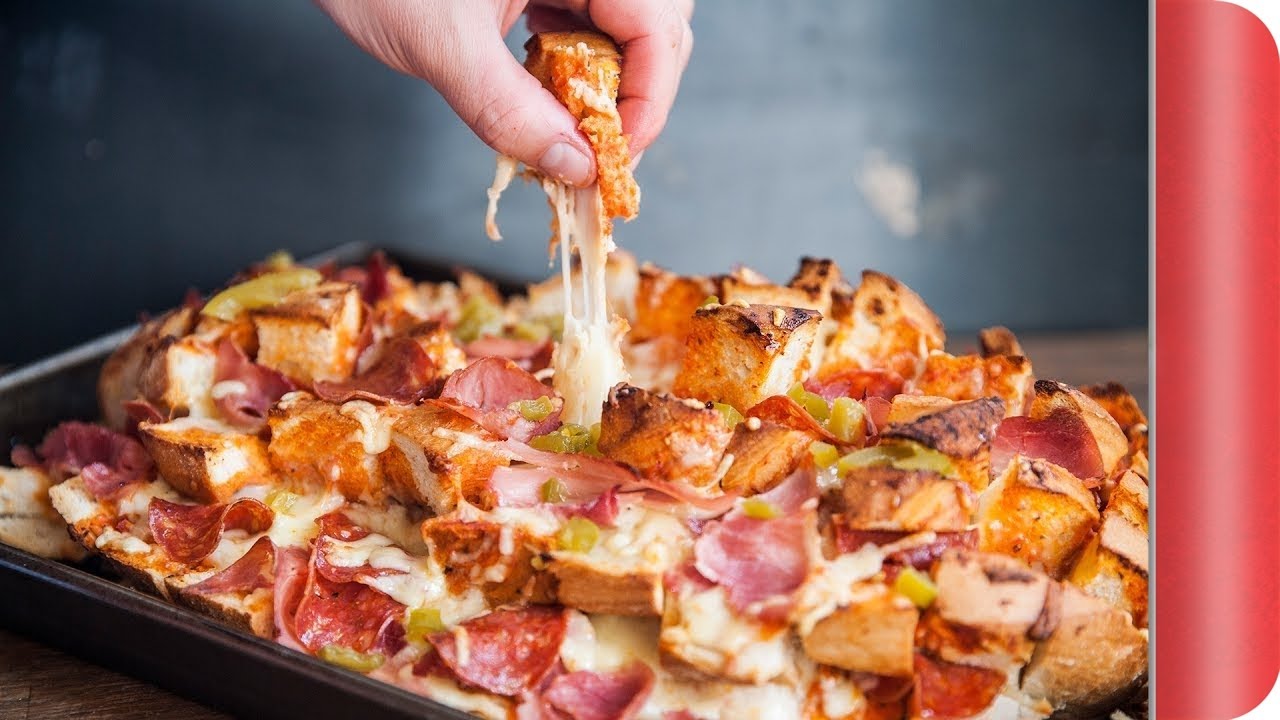 I was mildly enthused until they trotted out the heated honey with red chili flakes. That won me over to 100% drooling.

I too liked that tidbit. Its those little things, the tricks of the trade, that often brings out a best in the dish. They have loads of videos. All involving food with some concentrating on recipes, others are challenges and testing gadgets. A group of friends, 2 chefs and 3 normals (as they put it) having fun in the kitchen. This was more of a novelty fun video.

I follow them on YouTube, they are entertaining and have some good ideas.
I made this pizza again, the writer of the original dough recipe said not to cold retard for more than 3 days. I always thought the 2 d was a bit under. So I decided to actually test a 4 day cold retard of this recipe, and you know what, it definitely has better flavour and the cornicione has way more oven spring. Using almost the same marinade but adjusted some of the ingredients based on yesterday’s bake. Marinated artichokes, kalamata and green olives, roasted red peppers, grape tomatoes, peperoncini (way more this time), shallots in red wine vinegar (instead of lemon juice), olive, basil and oregano. Once again a good layer of Pecorino Romano cheese goes on first then the marinade. 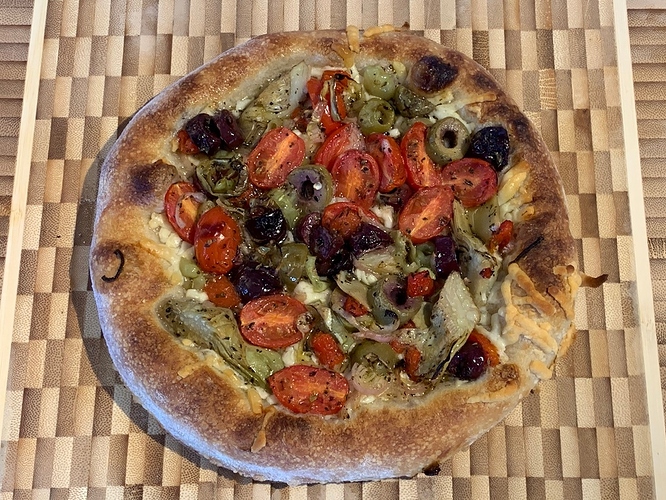 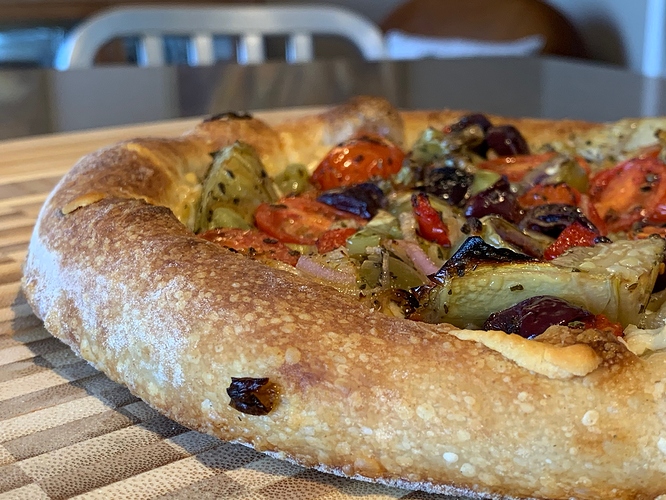 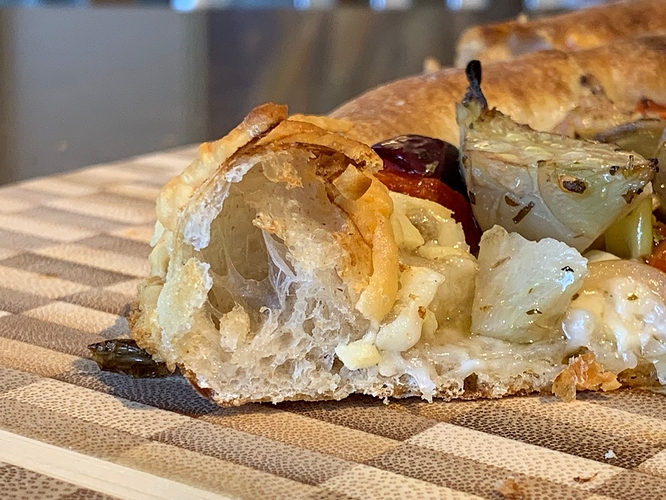 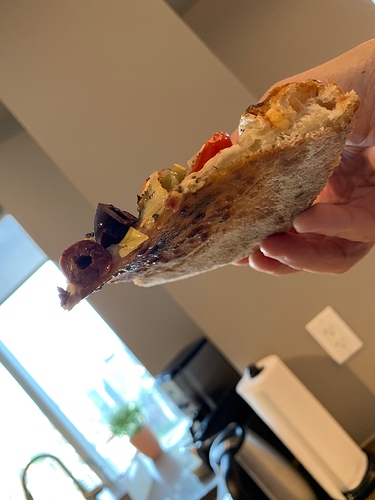 Those are some great looking pizzas, Benny. Beautiful crust, excellent toppings. I’m coming to your house for dinner.

Paul that is kind of you to say, let me know when you’ll be here a few days in advance so I can get the dough started.

Thanks so much. It was delicious as well.