I prefer bread baked with a substantial portion of whole grain flour. I have discovered that the use of an autolyse improves gluten development and, thus, the crumb. The method is simple. Begin by mixing all of the whole grain flour and a comparable amount of water, by weight. Four hours later, add starter and the other ingredients to complete the dough. The following before/after pictures demonstrate the change that occurs during that four hour period. The flour in this example is equal amounts of whole grain Kamut, whole grain spelt, and KA whole wheat. 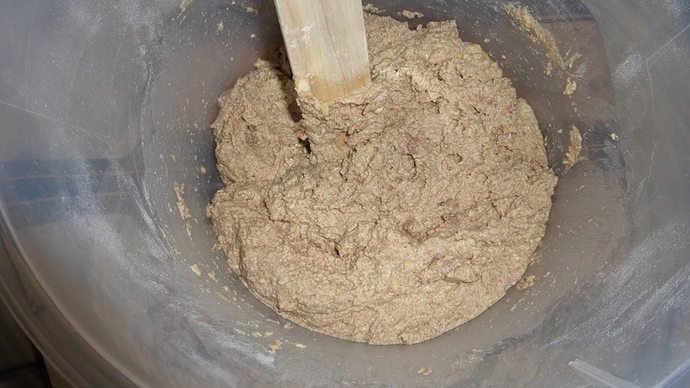 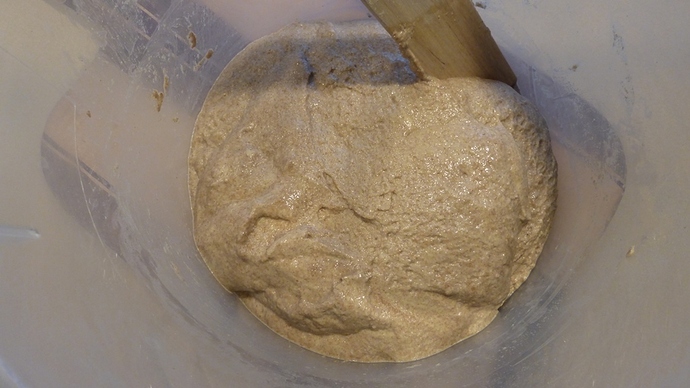 Thank you for sharing. I started my sourdough bread adventure with a tartine recipe that had 30-90 min autolyse (and 2.5 hrs of stretch and folds). I couldn’t hack the time commitment and was thrilled to discover the no-knead recipe here. I’d be willing to add an autolyse back into my process if it made my whole grain loaves taller. When I make two loaves with same technique and timing, but one has whole grain and one doesn’t, the whole grain is invariably a little flatter than the all-white one.

A couple of questions:

Is there a max on how long you would autolyse?

Would I have similar results in terms of better gluten structure if I did an autolyse on my rye whole grain flour?

Regarding length of time, I’m not sure that much benefit is gained by going longer than 4 hours, but I don’t think twice that time would be a problem. The explanation where I encountered the technique suggested a minimum of 30 minutes - maximum 12 hours.

I haven’t tried an autolyse with rye flour but I would expect a similar change (perhaps not as pronounced) as that depicted in the photos that I posted. Autolyse - literally, self digestion - happens as a consequence of the enzymes that are already present in the flour reacting with water. I’d suggest trying it and see how it works.

Thank you! I’m definitely going to try it soon, on the wheat and on the rye. I’ll probably take my starter out of the fridge and start the autolyse at the same time. My starter usually is ready in 3-8 hrs, never more than 12, so that will work out well.

You are welcome. Please let us know how it worked.

Coincidentally, I just tried a new recipe that my daughter had suggested (https://www.splendidtable.org/recipes/normandy-cider-rye). I approximated the gram equivalents of “cups”, used honey instead of sugar, used part apple juice because I only had a 12 oz. bottle of hard cider and 120 grams of my starter instead of yeast.

I mixed the rye flour (whole, not the medium rye specified in the recipe) and all of the cider and apple juice and let it rest for 4 hours before finishing the dough. The texture of the rye mixture changed during the four hour period, similar to that in the pics above with whole wheat flour, i.e. there was noticeable gluten development. But, consistent with what I have read about working with rye flour, the gluten is not as strong and the dough is very sticky.

My loaves were flatter than those picture in the recipe. I suspect that result is a consequence of 1) using whole rye instead of medium rye flour and 2) I worked the dough by hand rather than with a stand mixer.

Although my rounds were flatter, the loaves still had a good crumb and the bread definitely passed the taste test. I think the next time I try this recipe, I’ll substitute a 1/4 cup of gluten for the white flour. For sure, I will include the autolyse step for the rye flour.

I baked a couple of loaves of rye last friday/sat with a 4 hr autolyse. I hesitated to report on them because they were flatter than usual and as delicious as ever

Who knows what other elements of my process came into play.

I realized a true experiment would have involved me starting a second dough when the autolyse of the first was done, doing everything else the same on both and the comparing. I will do this soon and report. Btw, your recipe sounds good!

That recipe made a flavorful loaf of bread. Just a bit of the apple and sweetness flavor comes through. It is very different from what I am used to for rye - no caraway, fennel etc. so the flavor is all rye without any of the spice additions. My daughter, who asked me to try it, really likes it so I guess I will be baking it again.

interesting! So, no levain?

Cary - I’m not sure to which post you are responding with that question. The autolyse is a preferment. The lavain (starter) is added when the rest of the dough is assembled.

Î don’t think you can consider the autolyse a preferment, as there is no yeast or levain to ferment.

I’ve seen the term, “preferment”, used in a variety of ways. The only thing they have in common is that they refer to steps that occur before the levain is added to the dough to initiate the final fermentation. Technically speaking, autolyse would be the only one of those steps that qualifies a “preferment” because, without any microorganisms in the mix, there is no fermentation.

@louiscohen2006 @MTJohn A preferment does not mean before a ferment but rather a ferment done before the final dough! So a preferment can mean a starter or levain but not an autolyse, in the true sense of the term, which is done without starter, levain [or salt]. Some do include the starter or levain in the autolyse and technically this is called a fermentalyse because it is fermenting.

I fully recommend an autolyse as it improves everything from the handling of the dough to the final quality however one can over do it!

When the flour and water are mixed this sets off a lot of things in motion. The flour has time to absorb the water whereas the salt draws water out. So giving the flour time without the salt helps absorption. The gluten begins to form and gives it a head start before the starter or levain is added (but not always the case - see my comment above) and the sugars are more readily available for the yeasts. But at the same time if you mix flour and water long enough it begins to degrade and you might end up with a pool of dough even if the starter hasn’t had time to over ferment the dough. So while 30 min to 1 hr is ample for a bread flour dough and up to a couple of hours for a wholegrain dough is fine just remember that there can be too much of a good thing. Everything about baking bread is a balance.

I couldn’t venture a guess between the similarities or differences between flour from sprouted grains and autolyse as I haven’t worked enough with sprouted flours.

As for Tartine’s method for autolyse, when it comes to certain wholegrain flours, I imagine its only certain types of grain and at lower temperatures. I’ve seen this method before and many experience the dough breaking down too much with extended autolyse unless from the recipe given to practice the flours used were different and the method done at home is less controlled. Just advising very long autolyse with whole grains won’t always produce the same results when coming from a bakery. To be on the safe side you can get excellent results from a few hours.

P.s. Not too long ago I did an all night autolyse with 100% wholegrain flour but it was a very strong bread flour. I just thought it would be better to forewarn what could happen if using the wrong type of flour.

The definition given the term, “preferment”, as I first encountered it, was as follows: “These are
things that are done before the main fermentation, or rise, of the breads.” That certainly would include the autolyse. Likewise, it would include poolish, biga, and other steps to develop a levain.

These are things that are done before the main fermentation…

This is too ambiguous and open to misunderstanding. I think what they are trying to convey is that a preferment is a fermentation but done before the main ferment which is the final dough. This will include the starter and levain but not the autolyse in its true sense. If the autolyse has starter in it then its fermenting but doesn’t technically come under the term preferment as its not a true autolyse. The term given is fermentalyse.

Basically a preferment is the prep of the starter and/or levain (or biga and poolish) depending on the recipe. Once you start on the final dough its not the preferment anymore.

Also not worth the debate. That said, I agree that an autolyse that includes starter or yeast is not really an autolyse.