So many things to tackle when it comes to making gluten free bread. From structure to texture and oven spring to name a few. After experimenting for some time I’ve come pretty close to a very decent loaf making use of as natural ingredients as possible. Many gluten free recipes rely on all sorts of additives and gums etc. The aim of my game is to not compromise, as far as I can, on making my breads as nutritious as possible. Some things have proven to be easier than others but one of my last obstacles was getting as good a crumb as possible. Judging a final proof when it comes to gluten free is not easy. It isn’t easy with gluten flours but even more so when gluten free. Go over and you’ll either get a cavern in your loaf or when you take what looks like a nice loaf out of the oven just watch it sink. So while I’ve mastered a lot of the obstacles the crumb was proving difficult. Secret of a good crumb is as follows…

You want to pre-ferment a good ratio of the flour but not too much. It needs to be enough for a mix, shape and final proof with no bulk ferment as such. But not too much as you don’t wish to put all the air bubbles in only to take them all out when making the dough and there isn’t enough fresh flour for the final proof to gain back the air bubbles.

You need some starch in the mix so it gels while heated and something to gel when making the dough. But a balance of both.

The perfect final proof. Or proof, as it’s the only one. But how much?

As it turns out by not being able to bake on time and refrigerating has solved that problem. When I took this loaf out in the morning I thought it had been over done and was fully prepared for a flop. But as it turns out it baked beautifully. All this time I had been playing too cautious. Now I now how it should look when it’s ready to be baked even if I don’t refrigerate.

So here’s my formula. I’ve been experimenting using brown rice flour and sorghum flour (because that’s what I had in stock) in various ratios. The exact flours and ratios don’t make a difference, the method is the same.

1: 15% of the total flour is tapioca starch. The remaining 85% is healthy wholegrain flours. Starch is needed but kept to a minimum.

3: 1/3rd of the wholegrain flours is pre-fermented.

4: hydration is as much water as possible all the while the dough should be able to hold itself together. You should be able to knead it and pick it up to mould it with your hands. Wet but not coming off in your hands. Because more often than not I’m mixing flours at no particular ratio I always go by feel. 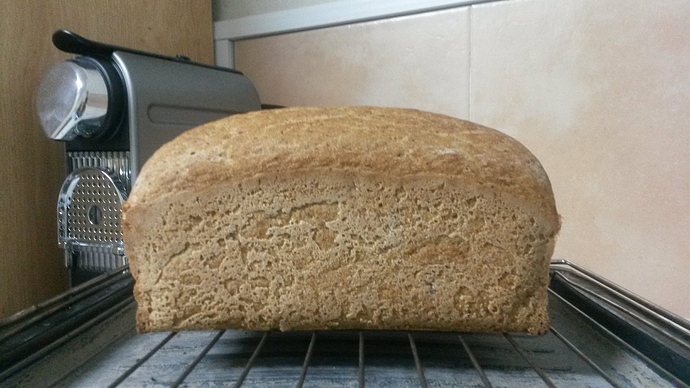 Not much too it. Tried different ways but all leads to the same thing. For this loaf I added the flaxseed, psyllium husks and some water to the pre-ferment and stirred it all up and left it to gel while I prepared the rest of the ingredients. Added everything else, the rest of the flour and salt, then slowly added in water while mixing and kneading. One of these days I should make note and give the exact amount of water but you should be able to add quite a high ratio. While mixing it will feel like very wet sand but you should be able to pat it altogether, pick it up in one lump to mould it into a loaf shape and gel like to the touch.

Place it into a prepared loaf pan, I used my Pullman with a lid, and final proof till 80% risen. Will have a nice dome on top. You’re looking at about 3 hours at room temperature (up until now i’ve been doing 2.5 hours but needs longer so i’m calling it about 3 hours although this one was done as described next…). Or leave it out at room temperature for 1 hour then refrigerate 8-10 hours overnight.

Bake in a preheated oven covered for the first 40 minutes, uncovered till a crust forms in top (about 10 minutes) then carefully take it out of the pan and return to the oven till a nice golden crust all over and it taps hollow. You’re looking at about 1 hour to 1 hr 10 minutes at 230°C.

Allow it to cool slowly by keeping it in the oven with the door cracked open a bit. Once warm then take it out and allow to fully cool before slicing. It can be a tad gummy when first sliced but it’s perfect by the next day. 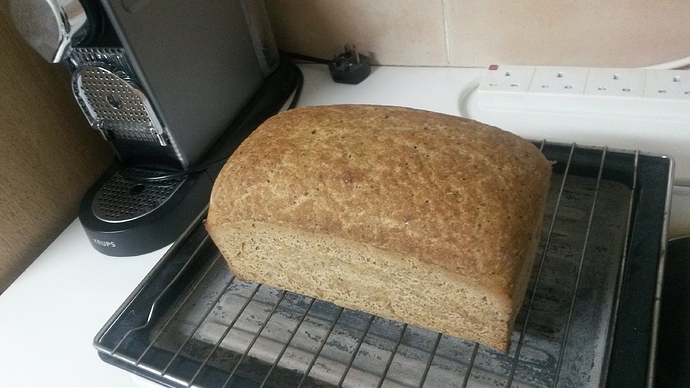