Mix in a bowl with Danish dough whisk. No autolyze. Let sit ~ 40 min then hand fold in bowl. Do this ~2-3 more times, while primary fermentation takes place in an incubated setting (oven with light, etc.) at 78-85ºF. This normally takes about 6-7 hours.

Separate into two loaves, shape, place into bannetons and into refrigerator for ~24 hours.

Cook straight from fridge in covered clay bakers for 40 min. at 485ºF

What I did different this time:

Replaced approximately 40g of KA flour with equal amount of diastatic malt flour. Used significantly less starter. I didn’t weigh it, but it was what I could get on the tip of a tea spoon. < 20g.

Same mixing technique, but rather than incubated primary fermentation, I set it onto the counter top at 70ºF room temp for about 10 hours, then place outside, where it was ~55º overnight.

The next day it had not risen much at all. The photo of the dough in the 6qt Cambro is after 24 hours. I brought it back to room temperature, hoping to shape and fold that evening, but after 36 hours it still had not risen much at all. I almost capitulated and used it as-is, but my instinct, and previous experience with my dough/starter told me to wait. So I put it outside again where it remained at ~55º again. Next morning, after 46 hours since start, it had risen about 25% more. Still not quite where I wanted it, but time constraints dictated that I shape and refrigerate.

After 25 hours of secondary fermentation, I placed loaves into 485º preheated clay cookers (one was a Breadtopia clay baker, and the other a Pampered Chefs)

Aside from the obviously much longer rise time using about 10% of my normal starter infusion, the differences were notable.

1: During cooking, I normally smell an aroma of acetic acid (vinegar), the result of natural fermentation. That was absolutely missing during this cook.

2: The loves were noticeably darker. Since my cooking method is unchanged, this is undoubtably due to the addition of diastatic malt, known to cause a “richer” crust. The loaf on the left was cooked in the Pampered Chef’s clay baker, and always comes out darker. More on individual loaf differences below.

3: Taste: NO SOURNESS AT ALL! In fact in a post on a sourdough page, most respondent’s suggested that a long, retarded fermentation would result in a more sour loaf. This was absolutely not the case here. One respondent probably had it right by suggesting that fermentation temperature determines sourness. Additionally, I like a darker crust than does my wife, but these are a bit dark even by my standards. The crust tastes a bit burnt, while the crumb is spongy and delicious! There is a notable difference when adding diastatic malt, which ads an almost sweet bouquet and palate.

4: Differences in the two loaves: They were fermented in primary as one! Once separated, they were shaped exactly the same. The loaf on the left was placed into a 10x6 banneton, and the other into an 11x7. Both were place side by side in the fridge. The rise on the left loaf was noticeably better, filling the banneton, while the rise on the right loaf was still retarded. I hoped for more oven spring on both loaves. The left loaf did better, as evidenced by the size and score spreading.

I need more starter, even when attempting a slow, retarded fermentation. 2% isn’t enough. Will double next time.

The diastatic malt improves the body of the bread, in my opinion, but I must learn to control what it did to the crust. Next time I’ll try a lower over temp, or perhaps less malted flour.

Your comments and advice/critiques are welcome! 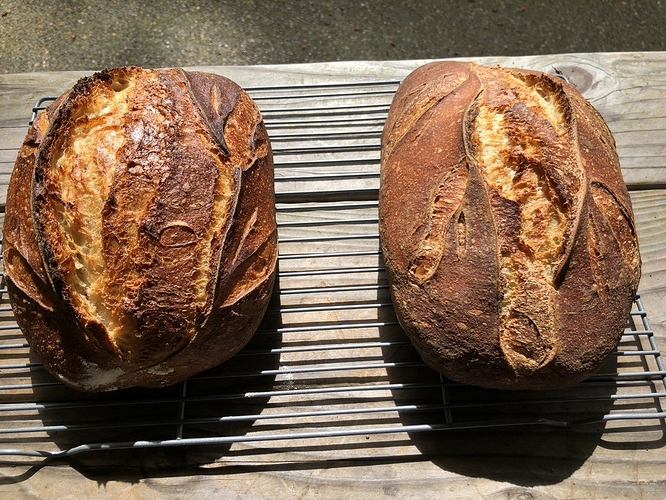 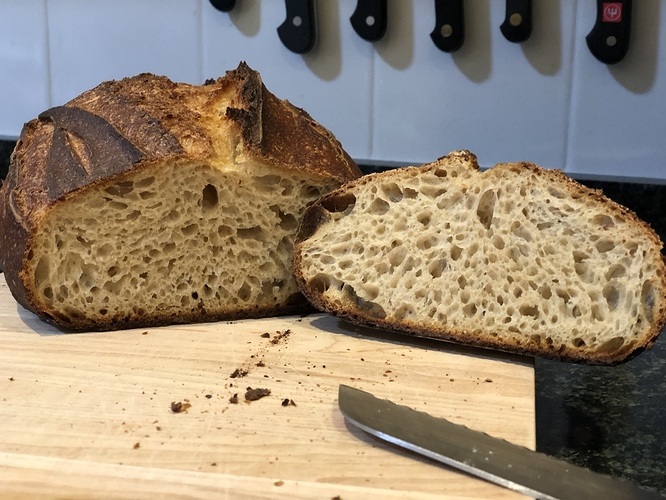 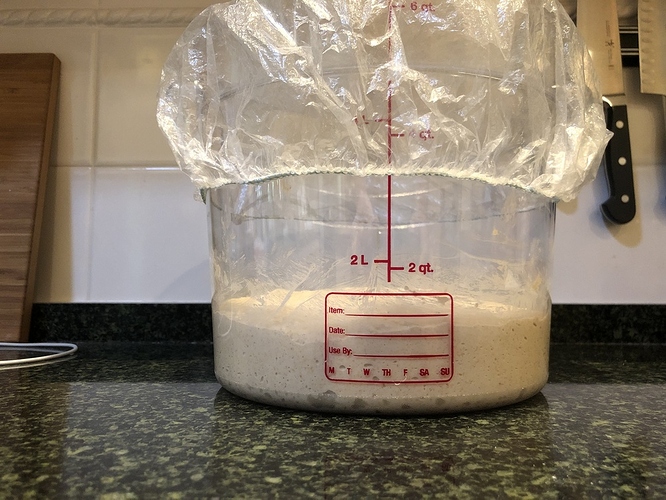 I have no experience with playing with prefermented flour percentages to experiment but I wanted to say that your crumb is outstanding, absolutely perfect in my mind. Great job and thanks for posting your experiment.
One comment is that you might find it is easier to control the amount of diastatic malt if you purchased diastatic malt powder. I typically use 0.5% diastatic malt when I use it.
Great bake.
Benny

I do indeed have commercial diastatic malt powder. I will keep your % in mind next time!

I agree with @Bentio that crumb looks amazing. Good job holding out for the fermentation to develop even though it was multiple days.