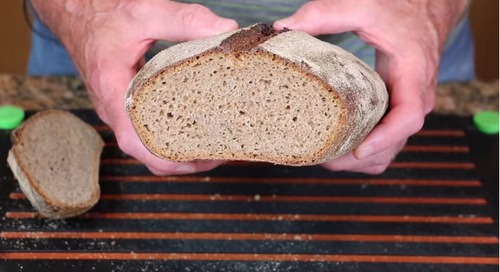 My easy bake series attempts to distill bread baking to its bare essentials and focus on what I think is all you really need to know to make good bread for you and your family.

If you do not see the "Reply" button, you will need to log in or register an account. Please click the blue "Log In" button in the upper right of the page. :arrow_upper_right:
homebreadbaker (Paul) August 8, 2015, 11:48am #2

I included 100g of your white bread flour in this one, along with 400g of sifted turkey red and spelt. The dough was pretty wet - probably about 80-85 percent hydration. Did some stretch and folds at 30 minute intervals over a couple hours, then left it overnight in a cool room. The dough was high and bubbling in the morning. It was too wet to really form into a proper loaf, but I am starting to get the hang of working with such wet dough - at least enough that I was able to form it well enough to roll it back and forth in bran and get it into the proofing basket without ending up with half the dough stuck to my fingers. 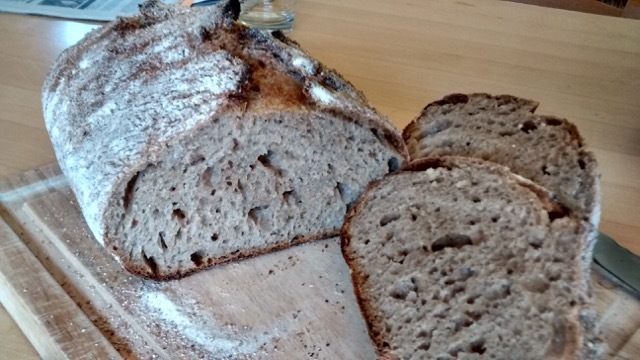 Hi, Eric,
Love these videos, can’t wait for the sandwich bread one, because that’s all I want to make. I think I have been handling my dough too much. You make it look so much simpler.

Your grandson is adorable!
Marilyn in Oklahoma

We’ve got one other video coming first, so the sandwich one should be early next month.

Hi, Eric and everyone,

I just tried the Whole Grain Sourdough bread using freshly milled white and red wheat, spelt, einkorn, and emmer and had pretty good results. It seemed a little more slack after the first rise than yours looked in the video, but there was good oven spring and a really nice moist crumb. The flavor and aroma of the mixed grains were outstanding The only problem, and this is a not so much a problem as a personal preference, is that it is too sour to my taste. I’m guessing that it’s because of the long fermentation of the entire dough. In searching around for a solution, I found on the “Cultures for Health” website two that seemed possible: 1. Using more starter which would allow for a quicker rise or 2. using baking soda to reduce the sourness. Any thoughts or suggestions? If anyone’s tried using baking soda, any idea how much to use for this loaf?

UPDATE: I’ve continued to read online various suggestions for decreasing sourness and tried the bread again today, using some of these suggestions.

The first time I tried this recipe, the dough seemed too slack, so I added more flour this time. That helped a lot. After 6 hours, the dough was well risen, so I formed it and put it into the banneton. It rose well again and after an hour, it went into the oven. It came out looking great, better oven spring. I let it cool for 3 hours, cut it open and - EUREKA! It tastes great! Now the wonderful taste of all the grains isn’t obscured by overwhelming sourness, it was balanced and truly delicious. It was the best loaf I’ve made so far.

Thanks for this great recipe and even more for your organic approach which has given me the confidence to experiment.

I have been baking bread for 3-4 months following Eric’s videos with great success. However, I tried to make sandwich bread yesterday and everything stuck to the pans.

I loved the “make it by feel” rather than measuring everything. 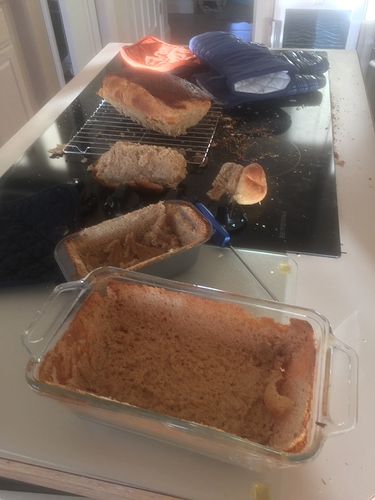 I can’t figure out how to post a photo, but it was ugly

Tried your basic sourdough recipe using half white flour and half whole rye. After the final proofing, the dough was very sticky and difficult to work with. The final product, was however very tasty and satisfying. Any suggestions on reducing the stickiness?

Haven’t seen the video from the beginning to end yet but the title is whole wheat sourdough. Is this the recipe you “followed”? You’ve done half white and half whole rye. That’s a whole different ball game. I suggest you try it again with whole wheat if you have it.

pxb, Rye tends toward sticky and so to expand on @Abe comment … that much rye is going to have a sticky, almost mud-like texture. You can try several things:

go to 60-40 or probably better 70-30 white to rye ratio. Go slow on adding additional flour. It is easy to add too much. The “wet hands” helps as Eric shows.

Now, if you really liked the taste, crust and crumb of your version … stay with it and be patient with handling the sticky dough. It can help to have a wet or floured bowl scraper or bench knife to lightly knead it before shaping.

Thanks for your feedback,

Thanks for your note. I’ll try wholewheat when I can get some.