Has anyone baked with flour made from Emerson hard red winter wheat? I have a farmer friend here in North Dakota growing it on a regenerative farm, though I don’t think this crop is certified organic. I just milled the 700 g of wheat berries he gave me to try (+ 300 g of the hi protein bread flour I get through Breadtopia), and baked it according to the basic Tartine recipe for wild yeast sourdough (1000 g flour, 750ml water, 20 g salt, 200 g sour culture). When I put the water in the freshly-milled flour for the autolyse, it smelled a lot like Kamut, very fragrant. It produced a much wetter dough than, say 50-50 Red Fife and bread flour. But after the usual stretch-and-folds it absorbed the water very nicely and looked pretty much like my Turkey Red or Red Fife dough, definitely a little softer. It is coooooold at the moment in my part of ND–and about 65 F in my kitchen last night as I mixed the dough. After about 4 hours I shaped it into 2 loaves to proof in oblong baskets. A couple of hours later it went into the fridge overnight. It didn’t look like it had risen that much when I took it out this morning. 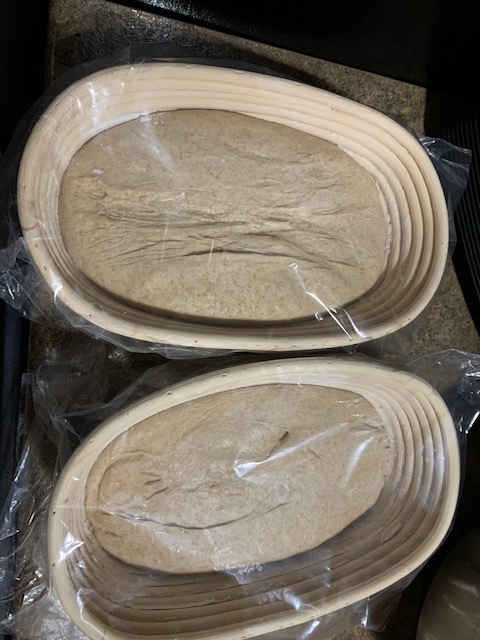 Emerson%20rising%20IMG_2298480×640 93.4 KB
But I often get quite a good oven spring from bread that has proofed in the fridge overnight. It sat on my counter for about an hour before baking on a pizza stone with a pan of water underneath. 15 minutes at 475 F with the steaming water and 25 more minutes at 435. It really stuck to the pizza stone! Next time I bake I’ll have to sprinkle some corn meal on before dumping the dough out of the proofing baskets.

It looks pretty enough, still cooling before I slice it. 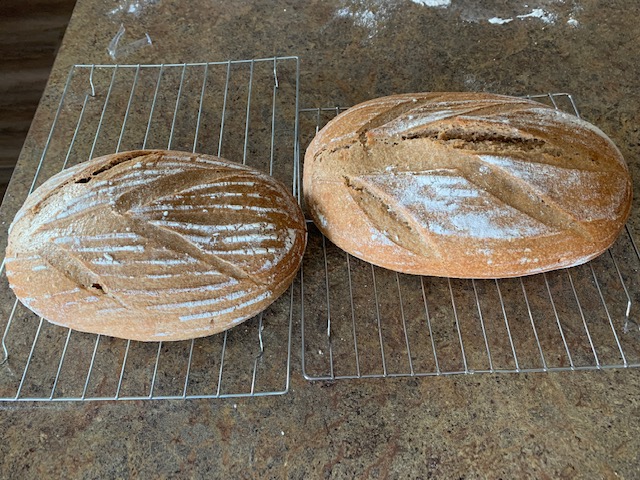 But it is pretty flat compared to what I normally bake.
There could be several factors involved: 1) my sour cultures hadn’t been refreshed for a couple of days longer than usual. 2) It could be the Emerson wheat and the fact that I used about 70% whole grain instead of the 50% I normally use. 3) the ambient temperature in the house was just too low for the amount of time I gave the dough to proof.

I’ve been reading about the Emerson wheat cultivar, which is widely grown industrially in Saskatchewan, Manitoba, and North Dakota because of its disease resistance. There were a couple of references to its relatively high protein content (12%) “stronger farinograph dough rhenology and larger Remix loaf volume” (Graf, Beres, et al in Canadian Journal of Plant Science 2013 93:741-748). But I haven’t yet found evaluations of Emerson’s taste profile or its relative nutritional value.

Okay, the bread is still warm, and I wouldn’t win the kindergarten “marshmallow test” on delaying gratification. The loaf is quite dense, but with a soft texture, and it tastes like kamut (khorasan). With some unsalted butter on it, it is quite delicious. 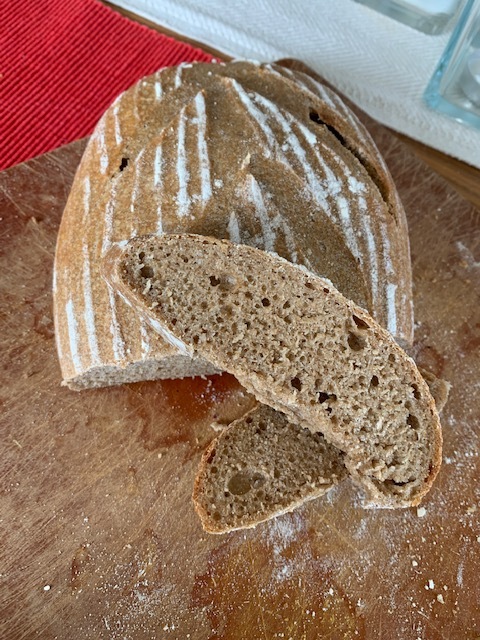 I’m excited to see what our friends Jim and Ardie think of this loaf that comes directly from their wheat grown in their field. But I’d value advice and insights from anyone who has milled and baked with this wheat re: getting a taller loaf. It might bake fine in bread pans, too. I will see if Jim can get me more of his cleanly-grown organic Emerson to play with.

I’m not familiar with this wheat but it sounds intriguing. I hope someone chimes in who has experience with it.

I do think the 50 to 70% jump in whole grain can make a difference. And I laughed at your mention of the marshmallow kindergartener test… I’ve failed that too.

I think what surprised me most was how similar the taste and fragrance were to Kamut. The grains are smaller and less golden than kamut. I’m pretty sure Emerson is not bred from the Khorasan line. I have not had other flour that I’ve milled with that taste and fragrance that I associate with Kamut. Do you know what gives Kamut—and perhaps Emerson—this very distinctive flavor?

Interesting. I would think the genetics are different with Kamut being 28 chromosomes. Emerson, I’m guessing, is 42. Just a guess. I can’t find much online though.