I hope it is alright if I post another Einkorn Red Fife Sourdough loaf.

This has quickly become our home’s favourite sourdough. There is something special about the Einkorn with the Red Fife. There is a hint of cinnamon flavour from this bread, which doesn’t contain any cinnamon, and a sweetness to the crust which is wonderful and that we love.

I’ve been using the aliquot jar lately and it is helping me more accurately determine the degree of fermentation. Last week I fermented to 40% rise before pre-shaping and shaping. Then I left the shaped dough in the banneton until the aliquot jar showed 50% rise. This week I ended bulk fermentation at 50% and pre-shaped, then shaped and then put the dough immediately into the fridge because by the time the dough was placed into the banneton, it had risen an additional 5% to 55%.

This bake was the same 20% Einkorn, 9% Red Fife which was all in the levain and strong bread flour. It had the same hydration of 82% and 9% pre-fermented flour. There was a 3 hour autolyse. Salt was the usual 2% and added with water 30 mins after the mix. Bulk fermentation lasted 4 hours and 15 minutes at 80ºF. Structure and gluten were built with a combination of 100 slap and folds done after salt was added, one stretch and fold, one lamination then three coil folds. After 50% rise, I pre-shaped the dough allowing it to bench rest for 10-15 mins then did final shaping and then into banneton and the fridge at 2ºC for 21 hours of cold retard.

Baked as usual in a dutch oven preheated in a 500ºF oven, when the dough was loaded into the dutch oven the temperature dropped to 450ºF with the lid on for 20 minutes. Then the bread was removed from the dutch oven and continued to bake now at 420ºF until good colour was achieved, this took more than 20 minutes turning the bread to get even colour.

My score was more off Centre than usual and it is interesting to observe how that affected the shape of the resulting loaf compared with the last one. The long cold retard along with brushing water on the dough seemed to contribute to even better blisters than the previous bakes. 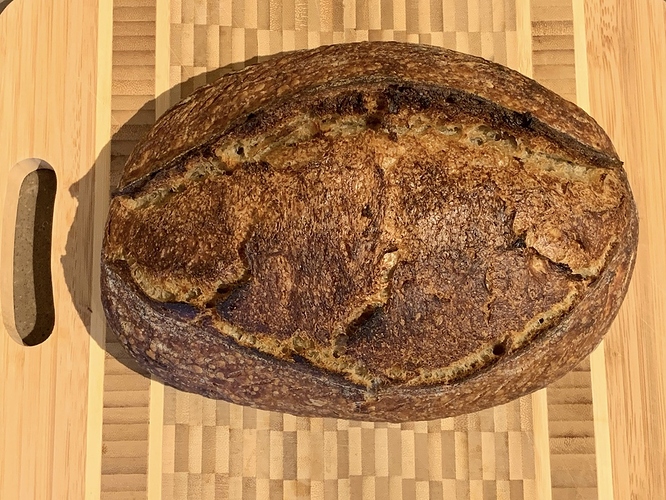 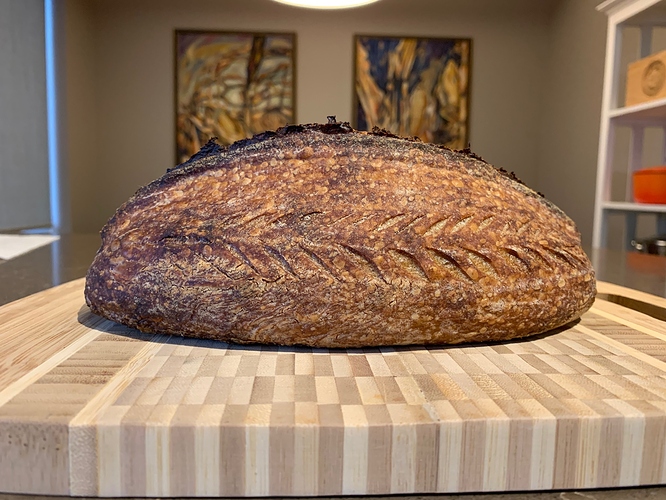 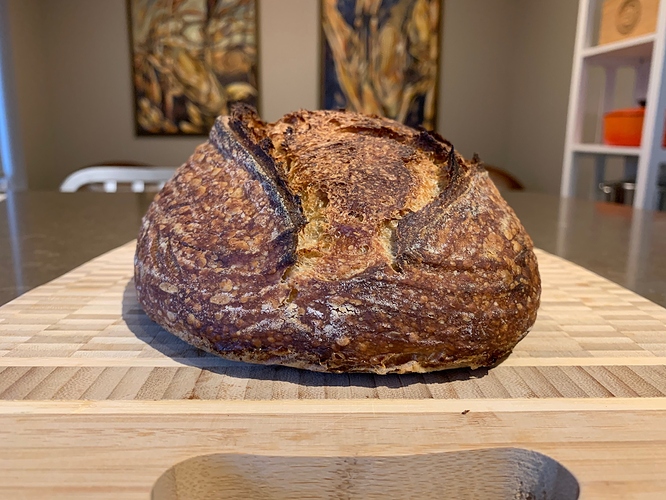 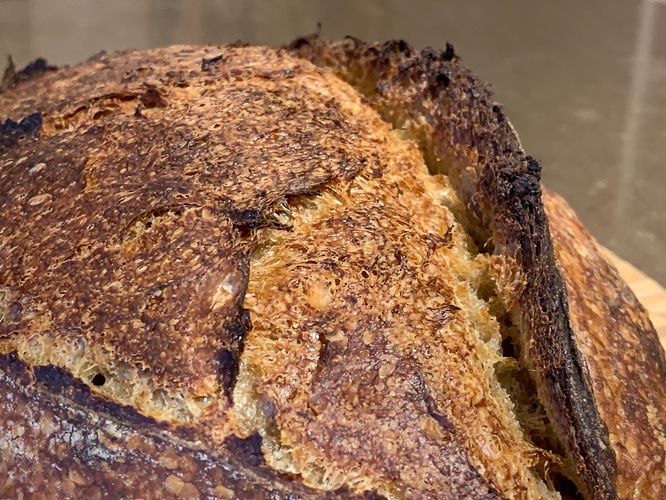 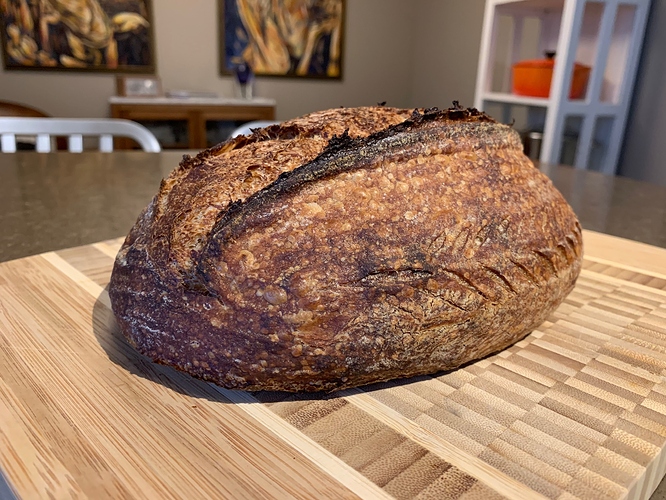 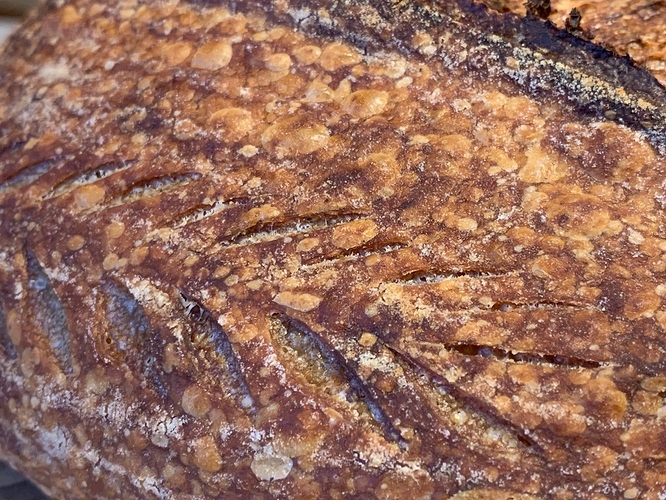 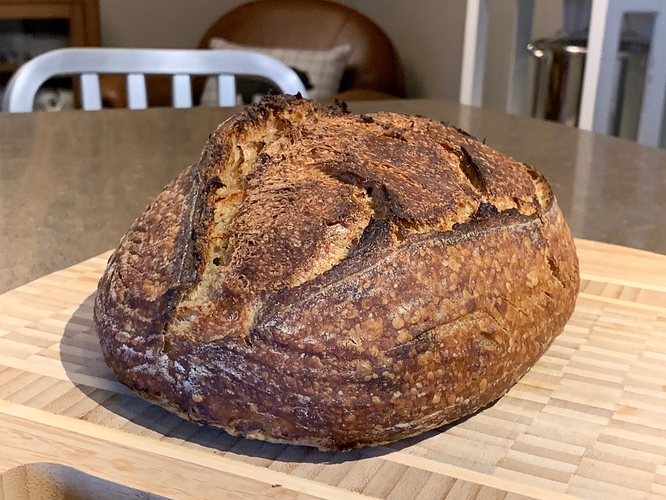 Crumb, slightly more open with the 50% fermentation I believe. 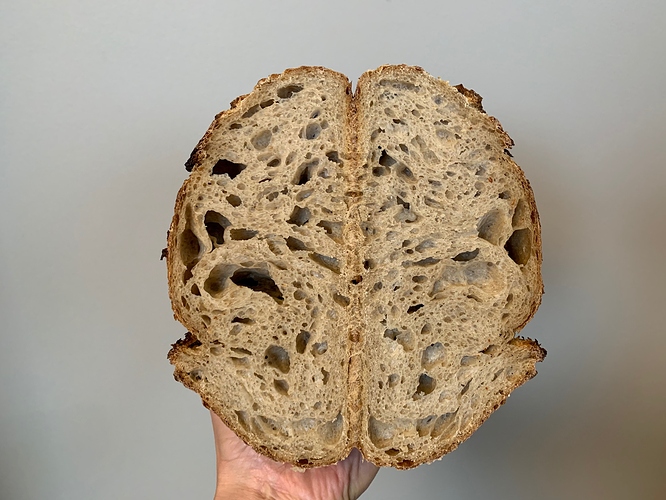 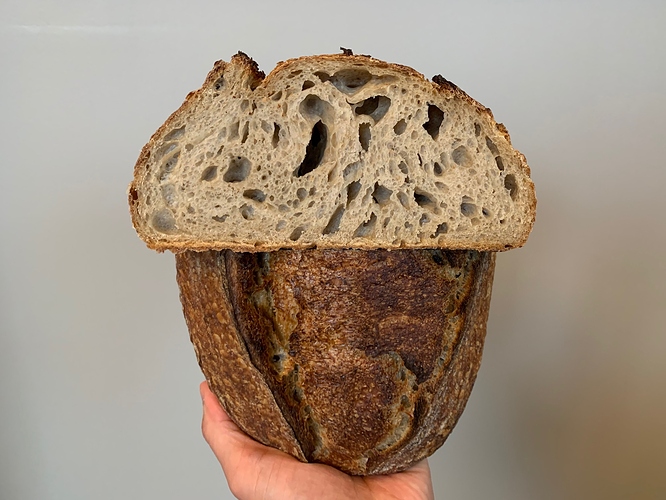 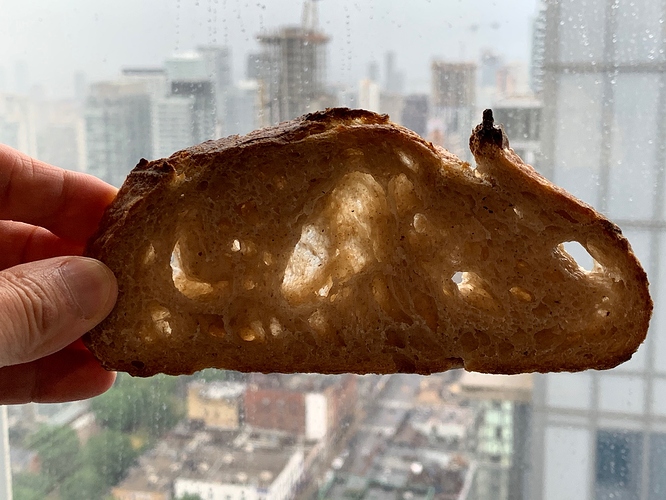 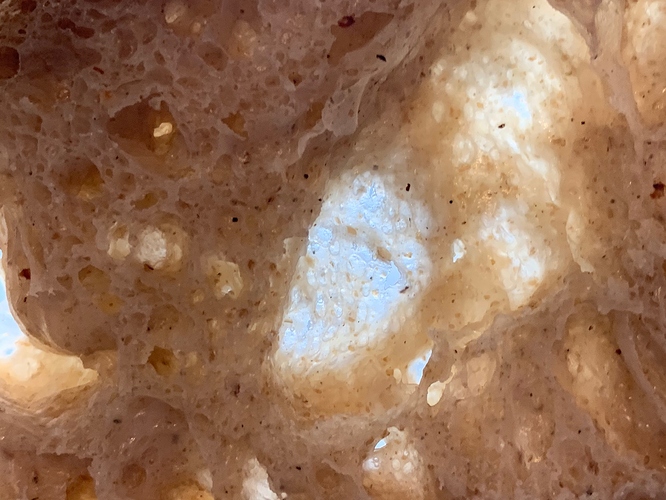 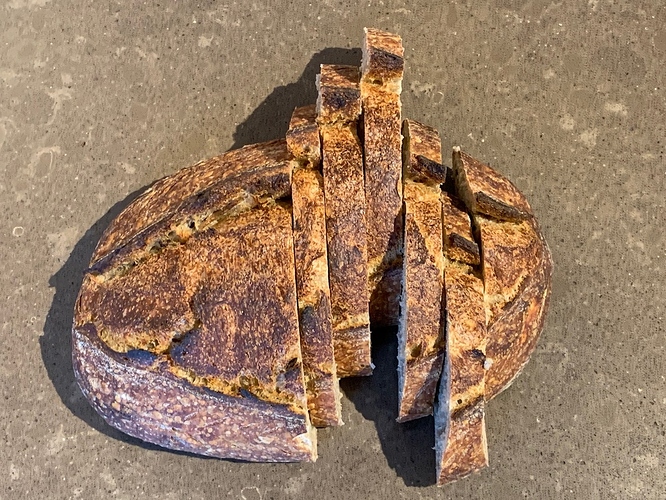 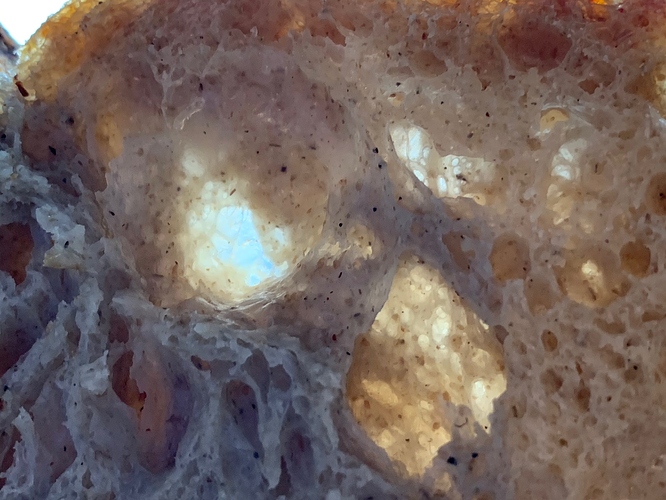 Red Fife has a sweet cinnamon taste and Einkorn has quite a mineral taste to it. I think my local Einkorn has a bit of a smoked taste to it. Difficult to describe but the yellow/orange tinge to Einkorn is due to the high mineral content which I’m sure has something to do with the flavour. I can imagine the two flours complimenting each other. 100% Einkorn does need to be left alone and suits a long ferment with minimal handling. But at 20% with 9% red Fife and the rest strong bread flour it won’t effect the handling too much but will impart lovely flavour. I did the Tartine Country Loaf using whole Einkorn for the wholegrain and it was wonderful. Lovely looking loaf Benny.

Thank you Abe, I’ve enjoyed playing with Einkorn for 4 bakes and I think the 20% was the sweet spot. I guess if I went any higher it might start to be harder to deal with from what I’ve read. I’m not sure what I would do to try to get a more open crumb, but I’m quite happy with the crumb I have been able to achieve.

I think you should do at least one 100% Einkorn loaf to fully appreciate this flour for what it is. If you’re interested I’ll send you my formula and method.

I’m not sure I have enough einkorn but sure I’d love the formula if it isn’t too much trouble. Thanks Abe.

This formula I’ve devised for my local Einkorn flour. Haven’t tried it with Einkorn from any other source.

I’ve found that even with 100% wholegrain the sweet spot for hydration is around 70%. Mix the flour and salt in one bowl. In a small jug disperse the starter in the water. Make a well in the flour and pour in the water. Combine to form the dough. If it combines well and makes a workable dough then by all means knead a little but as soon as it starts clinging to your hands - stop! If it’s already too sticky then just mix it well and leave it. Now you want a long overnight ferment leaving it alone completely. Bulk ferment is done when risen well, at least doubled, craggy on top and what was once a dough now feels more like a sponge. Prepare a loaf pan and portion it out, like a rye, and smooth over. Once the dough crests the top and has a nice dome bake in a pre-heated oven making sure baked through properly. Like rye it needs a little lower temperature because it needs to be baked for longer and you don’t want the outside to be done long before the centre of the bread.

Thanks for that Abe.

My pleasure. If you get to try it be sure to post it and your thoughts. The actual formula is nothing unusual it’s more about the method and how to work with Einkorn. The hands off, long ferment till it “breaks the mould” and then treated like a rye.