I’ve made this once before and wanted to give it another go since I still have some Einkorn and wanted to inch up the % of it in the bake. Being aware of the difficulty baking with Einkorn, I just increased the amount from about 10% to 13.5%. The dough handled just fine.

Over the course of bulk fermentation at 77ºF did a letterfold, then lamination and then 3 coil folds.

When volume increased 33% or so shaped and placed in banneton. Continuing to watch fermentation via the aliquot jar left on counter until 40% rise then placed in fridge 2ºC for 20 hours. (Had to work)

Strangely both times I have baked this I have found the browning of the crust to take quite a long time and to be uneven. Has anyone else had this issue with Einkorn? I wonder if I’ve over proofed a bit causing the uneven browning, but I’ve never had that before with other sourdoughs that I have baked, it is strange. 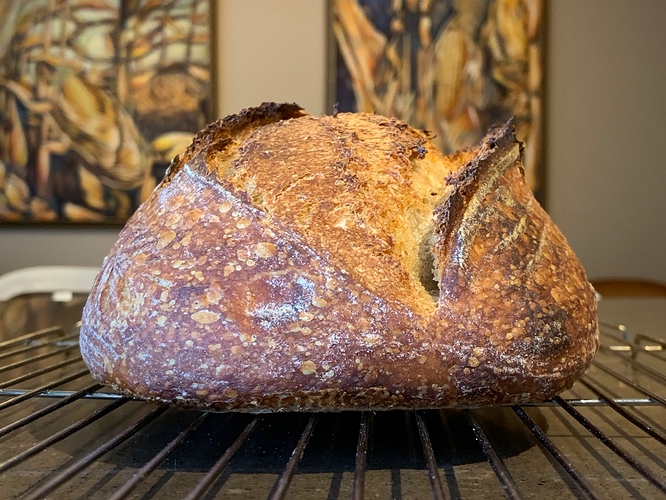 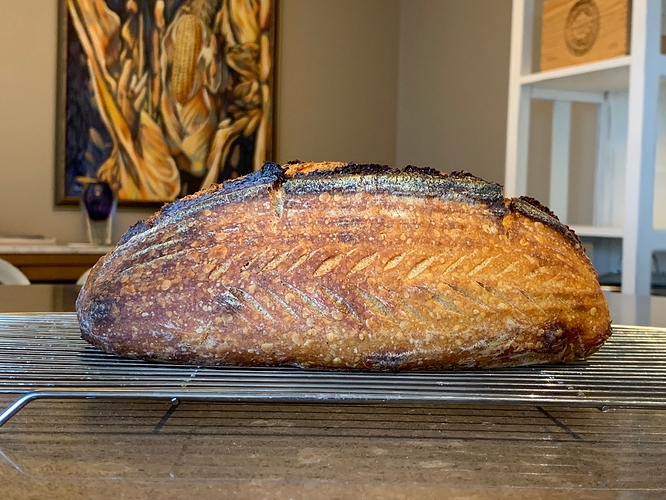 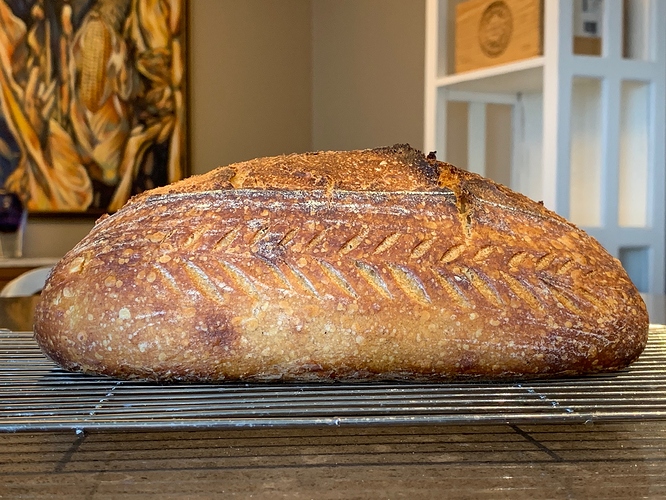 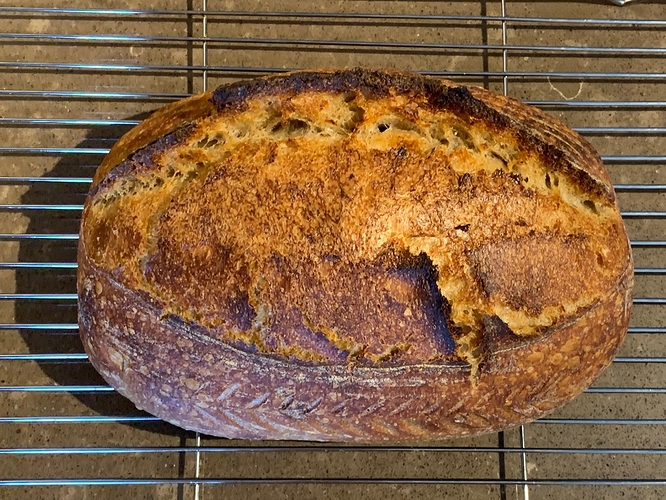 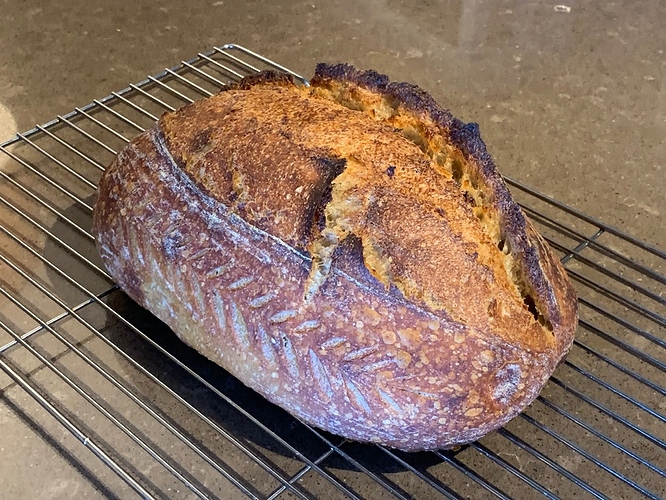 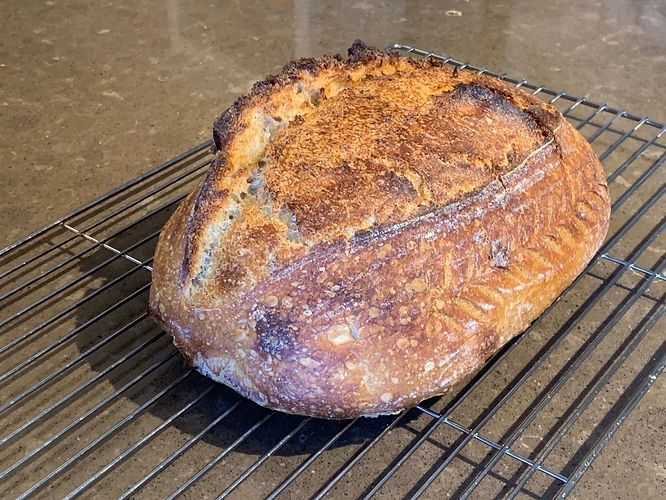 Thank you Trillium, we’ll see how the crumb is later today when I bring this loaf to visit the in laws. When I’ve made a similar loaf before, it was tasty.

Here is the crumb. I need to push the bulk a bit farther next time, perhaps to 40%? 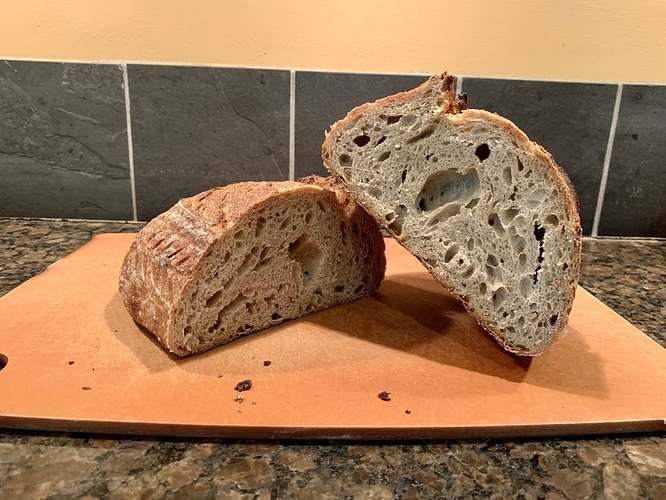 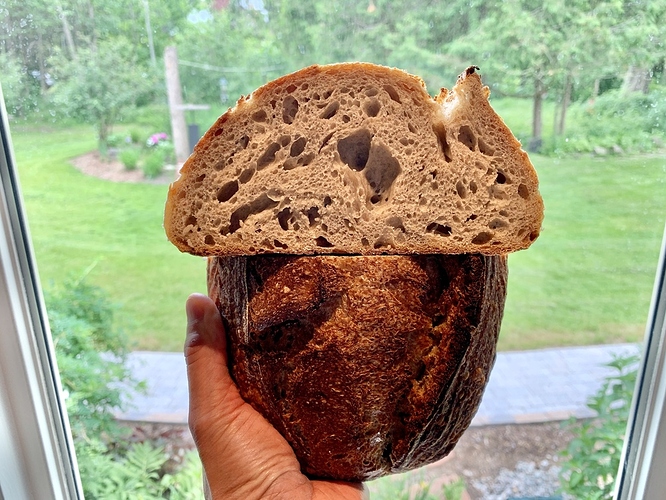 I’m sure it’s delicious. I hope someone with more experience baking with a high percentage of bread flour will respond to your post with helpful suggestions. All my sourdough baking experience is with 100% whole grain flours, which for me has never produced large holes. Due to all the bran, I’m guessing.
~ irene

I can’t point to Einkorn for irregular browning. And if it were the type of flour or over-roofing, I would guess that the impact on browning would be uniform.

However, I have seen this as well and I have always attributed it to a combination of the heat in my oven not being perfectly uniform and the dutch oven blocking direct heat after I take the cover off. Like in your bread, these spots always seem to be near the bottom of my bread where the Dutch oven blocks the most direct heat from the oven.

Funny that is has only happened with Einkorn sourdoughs to date. I suppose if I notice it again I’ll pull the loaf out of the dutch oven and put it directly on the oven rack, perhaps that would help the browning.

That’s what I do.

I’ll try to look into this with my next einkorn dough. (No ice in this equation, right? Or long fridge proofs with cold and hot spots?)
It’s a good looking bread either way.

No ice cubes in the Dutch oven. Just the usual overnight cold retard in the fridge.

Actually I just re-read my post and there was a long fridge cold retard of 20 hours. Do you think that the microbes used up all the sugars during that long fermentation leading to poor or irregular browning? I forgot about that.

My first time with Einkorn I didn’t do that long a cold ferment. That happened this time because of work.