This is an adaptation of a Tartine recipe with one of Maurizio’s and using generally the methods of FullProofBaking. I attempted to score a leaf on the dough but was hilariously unsuccessful in my attempt. It just looks like random scores on one side.

In a bowl stir together the olives, nuts, herbes de Provence and lemon zest

Flour for my starter feeds is composed of a mix of 10% rye, 90% bread flour 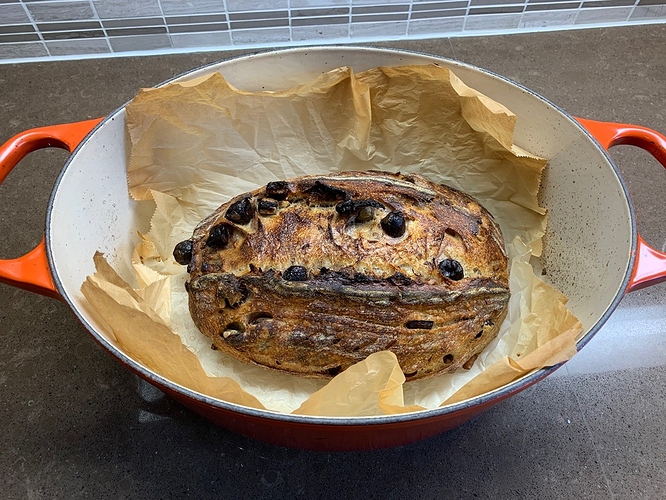 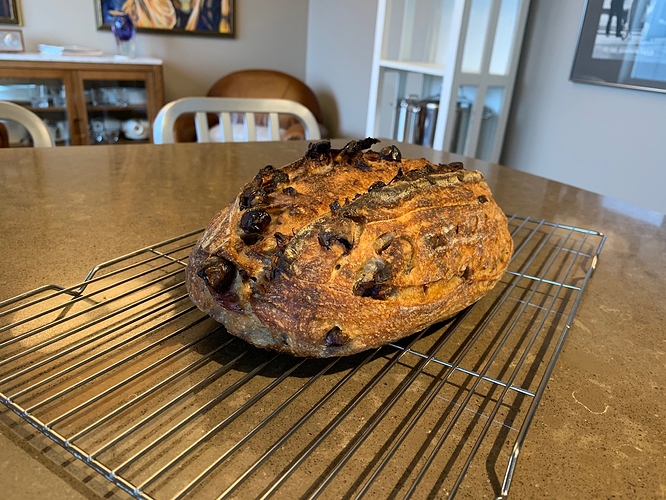 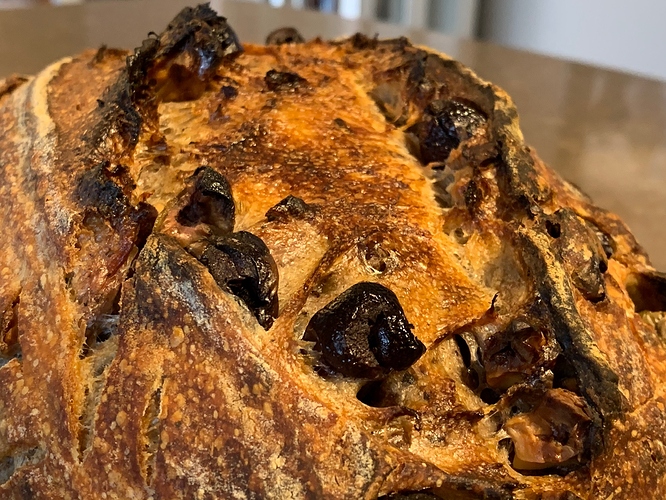 Looks amazing ! Would love to see the crumb. I printed it to try it myself soon.

I will post a crumb shot once I cut it much later today or tomorrow. Hopefully I got the bulk fermentation OK. I’m a bit worried I over packed it with add ins, but we shall see, it sure smells good if you like olives.
Benny

I’m very pleased with how this turned out. Usually the first time I bake a new bread it isn’t great and I have to try several times to improve it, but I think this is good, what do you think? What could I improve upon? I’m always looking for ways to improve. 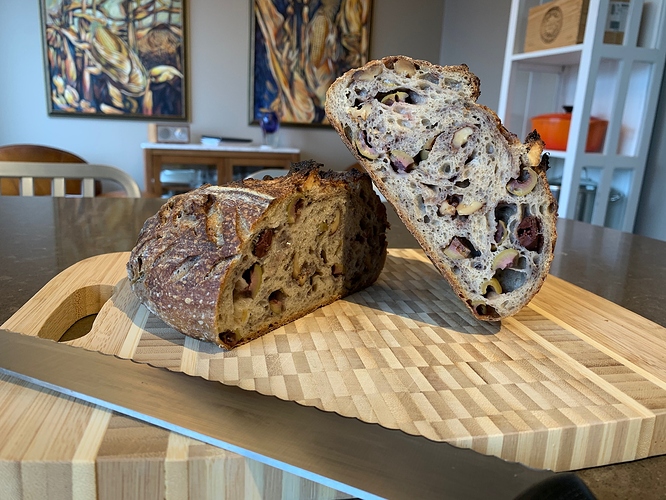 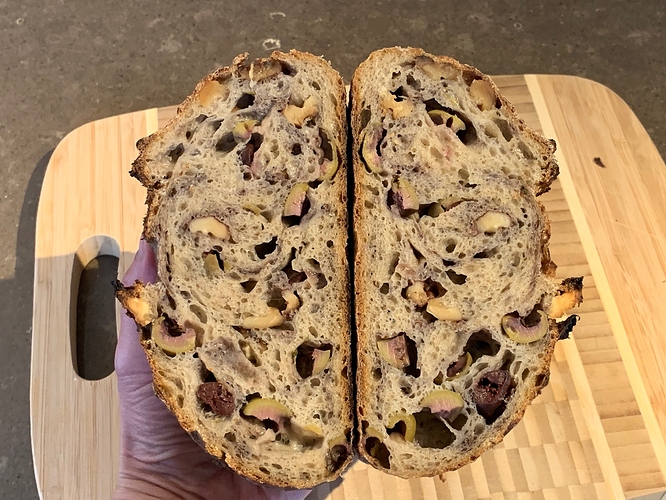 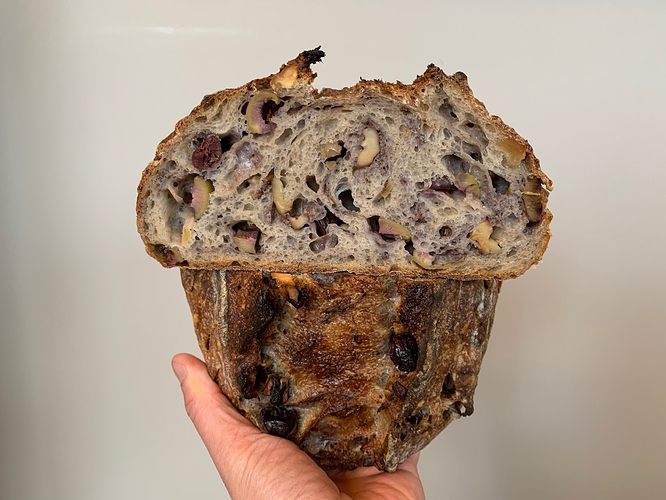 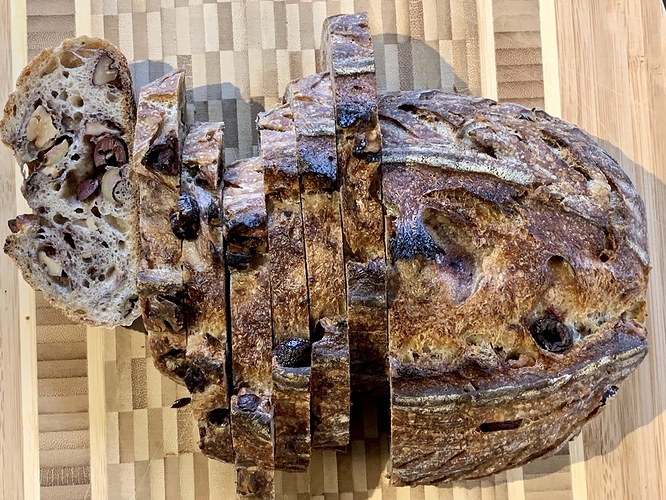 I know you are not kidding, but “improve” ? I can’t even suggest ways to improve the quality of the photographs, let alone the bread !

Great, uniform crust - with an overdone bottom. Even distribution of olives and walnuts, with a crumb that has the perfect mix of medium air pockets and those large open spaces we are wish for when we make the first cut.

Now this is definitely going on my “must bake” list.

That should have been “WITHOUT and overdone bottom”…sorry.

I really do hope you bake this, it really is tasty and turned out better than I expected. 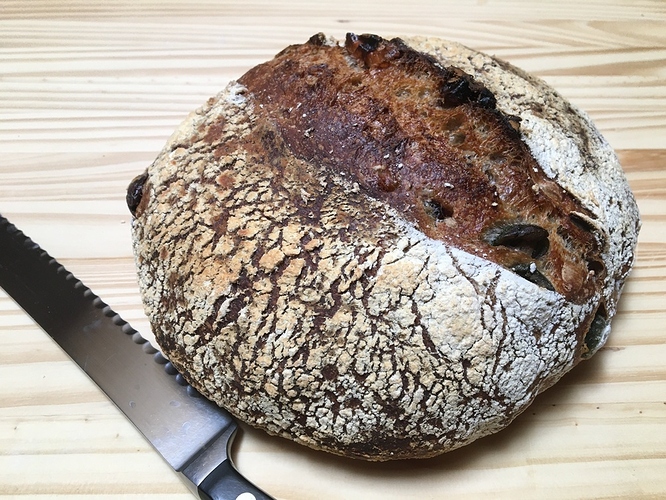 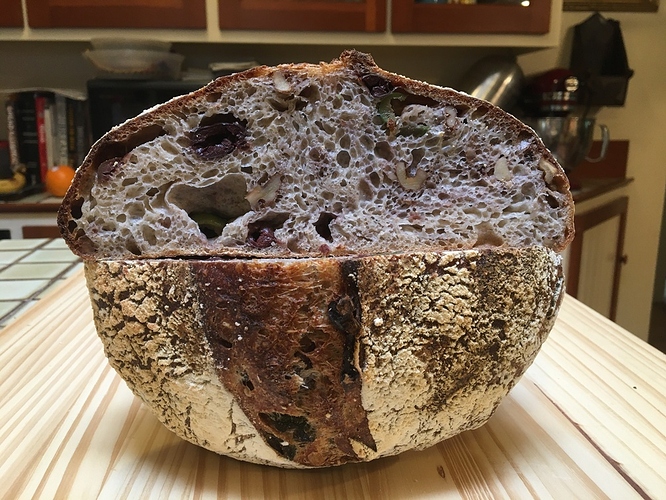 @Bentio…well I did it. For the most part, I followed your recipe to the letter, but ad libbed a bit where I was either unsure, or felt that the proofing needed a bit of a twist.

While you didn’t indicate, I chopped the olives…only about enough to roughly turn them into halves, but also reduced the quantity to only 1 cup. I added the malt to the flour before autolyse, not at the levain add step.

This was my very first “specialty” bread and I was more than a bit nervous about choosing a higher hydration recipe as well. This was also my first introduction to letter and coil folding. Frankly, the large olive pieces were a challenge to deal with in the folding, but other than having to pinch a few into the dough during the final shaping, it went well after all.

Years ago I was fortunate enough to buy a “store rerturn” Brod and Taylor proofing box, so I could easily manage the levain at 80, I dropped the temp to 75 for the BF (my usual temp for SD)

I come to find out that my fridge is on the warm side, so while I followed the fold and BF sequence to the letter, I nonetheless made a judgement call and let my boule set in its 9" banneton for 30 minutes after final shaping, and before it went into the fridge for the night. After the retard for 15 hrs, I baked in a Dutch Oven at 500, 20 mins covered, but it took another 27 uncovered to brown up and reach an internal temp of 207.

By in large I’m very pleased, but give it only an 8, as the crumb is a bit gummy and even with the olives, I think I would push the salt amount up a bit next time.

My wife, on the other hand, LOVES it and has demanded it stay on the house menu. The two of us can only eat so much bread (no matter how good) so a neighbor received the other half…MUCH to his delight. He’s happy with the salt level.

Steve that looks awesome, nice photography by the way

Your crumb looks nice and open. It seems I missed a few details and you wisely cut the olives in half and added the diastatic malt during autolyse. Glad you both like the flavour. Perhaps it needed a bit longer in the oven after the lid was removed to fully bake and dry out the crumb. Great bake.
Benny