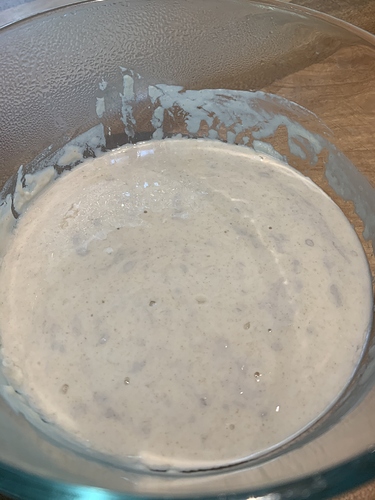 If I may tap into the collective wisdom: I took my sourdough starter out of the refrigerator to find a dark, dark gray mold up along the walls of the jar and on top of the started. I wish I had taken a photo. I scraped off the sides, then the top. With a clean spoon, I scooped out a spoonful of what looked clean beneath. After feeding, a few days later, the starter has gray streaks. It looks like I need to start over.

How can I prevent this with my new start?

At what stage do you refrigerate your starter after feeding?

That’s funny because I had one reason in my head that maybe you were refrigerating immediately after feeding in which case my answer was going to be that you should wait until its activated and doubled before refrigeration. Reason being is that the acidity would help keep mould at bay and when freshly fed it hasn’t built up enough acidity. But from what you’ve just said its the opposite problem. You’re leaving it too long and by the time its refrigerated it is long past needing feeding again. It was hungry and probably depleted of a healthy population of good bacteria and yeasts to keep other critters from taking over. So I would firstly advise to feed, leave it a few hours so its active and bubbly, but not for too long it needs feeding again, and then refrigerate.

Perhaps this starter can be saved. Try taking a healthy looking part of the starter and feed. I’d also clean out that jar thoroughly if using it again. Give to some TLC (a few good feeds allowing it to peak before feeding again) and then with the final feed do as described. If it starts looking like a starter, smelling like a starter and behaving like a starter its fine. See how that goes.

P.s. beware of red mould. If its red then chuck it. If its a bit grey with some healthy parts then fine to try salvaging it.

I’ve never had a mold problem with starter made with bread flour; but I find that Rye flour starter will mold very quickly - sometimes in 3 or 4 days if not refreshed. My bread flour starter has gone long periods, occassionally a2 or 3 weeks in the refrig, without refreshing and no mold.

Thank you, Harold. I’ve been feeding it with I bleached all purpose flour. I wonder if I was supposed to be doing bread flour instead.

My whole rye starter can go for many weeks between refreshments.