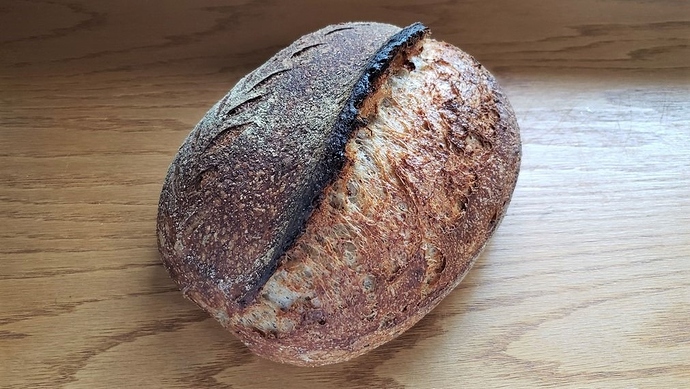 Corn porridge and rosemary sourdough bread combines fantastic aromas, and savory and slightly sweet flavors. The texture of the bread is custardy and wonderfully soft.

I love the flavour corn brings to a sourdough loaf. Couldn’t agree with you more Melissa. I have baked a tomato and rosemary sourdough (using tomato paste as part of the dough as supposed to cut up or sun-dried tomatoes as an add in) but never corn and rosemary. Sparked my interest!

The recipe says to add 9 grams/1.5 tsp of something but does not specify–is that supposed to be salt? or yeast.

Thank you for catching that.
Now you have me calculating for fun, though, 9g of instant yeast would be about 3 tsp.

That would be a very puffy dough, kind of like this sourdough pizza with some added yeast.
https://photos.app.goo.gl/Doa5rsnkmBbrpBiD8

I have some freeze-dried corn on hand. If I grind it into a powder, could I mix it with corn flour (keeping overall amount the same) without negatively impacting the texture of the bread?

This recipe is very timely for me. Just this week I tried for the first time Hi Rise Bakery’s Corn Bread which is included in Maggie Glezer’s inspiring book, Artisan Baking Across America. This particular recipe was for a straight yeast pan bread and used both corn meal and fresh corn kernels cut from the cob. I used a commercial stone ground white cornmeal which is probably a little coarser than corn flour. It was a delicious cross between a non-yeasted cornbread and traditional yeasted pan loaf. I wondered what it would be like with sourdough, so your recipe will be a great way to find out. Based on the wonderful corn flavor of the bread I made, I would strongly encourage adding fresh corn kernels either whole or ground up a bit.

This sounds delicious! Another recipe on my to bake list. I have speckled corn, blue and white, that comes out of my garden. That will be perfect for this recipe. Melissa did it again!

So if you do not have a grinder is there a way around that part?

@katydid With substitutions, the two main things to keep an eye on here are going to be dough hydration (add water very slowly) and the coarseness-gluten trade-off. The more chunky the corn addition, the denser the loaf will be. Not a bad thing (see @wendyk320 's comment above) just expectation management

@wendyk320 I’m glad you might be able to use the recipe. I’ll have to try bigger chunks of corn at some point.

@paintersson The paragraphs above the recipe give some substitution possibilities if you don’t have a countertop grain mill. Specifically you can try store-bought corn flour and even pureed fresh-cooked corn – but you need to be very careful with dough hydration if you go that latter route.

Thank you for a prompt reply.

I made this bread today. The dough was so wet it was like trying to shape cake batter. At about 86% total hydration there’s too much water here for a 75% white flour dough. Next time I’ll drop that down to 72% and try again. It’s in fridge now, will bake it tomorrow.

I hope it stiffened up a bit overnight

and that you enjoy the flavor.

I’m hoping to gather info on corn types, grind fineness, and dough outcome etc. Did you use Mockmilled corn or a different approach?

Here’s a beautiful loaf of corn porridge and rosemary sourdough bread posted by someone on Instagram using masa harina, which is nixtamalized corn flour. 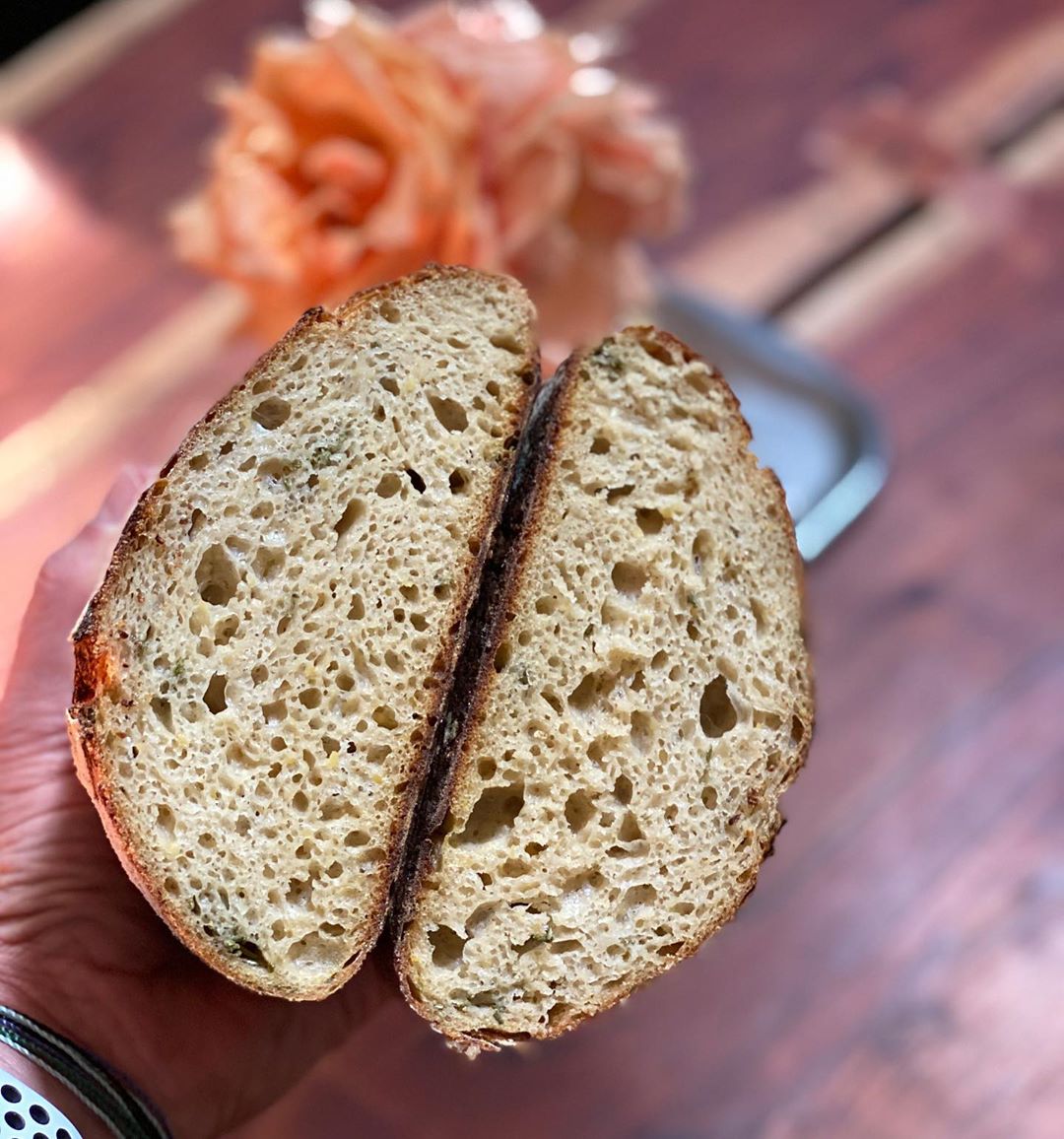 The photo of corn porridge and rosemary sourdough bread using masa harina sparked my interest. Today I plan to nixtamlize yellow dent corn and am considering diverting some for use in this bread. My normal procedure for making tortillas starts with simply grinding the nixtamalized corn in a food processor. The resultant grind is not as fine as masa harina but I’m guessing that this slight chunkiness will work for the corn porridge portion of the recipe. I certainly expect to have to adjust the overall water content, of course. Any thoughts on this approach?

When I made the red and yellow corn porridges, I used only enough water to saturate the corn flour. The porridge was stiff, which you can kinda see in the photo gallery when I’ve loaded everything into the mixer, and the yellow corn looks like a cake.
Maybe use that as your guide for how much water to add to your masa harina, as I suspect it will absorb less water than my corn flour did.
I’m sure it’ll be delicious with the coarse grind too!

I used sprouted yellow dent corn milled as you specified. Today I’m trying again, with (unsprouted) blue corn, and moving the overall hydration down to 72%. Pictures are of my first loaf. 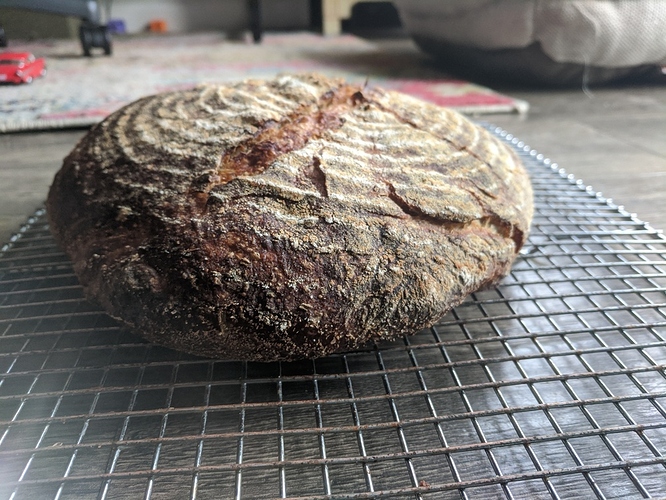 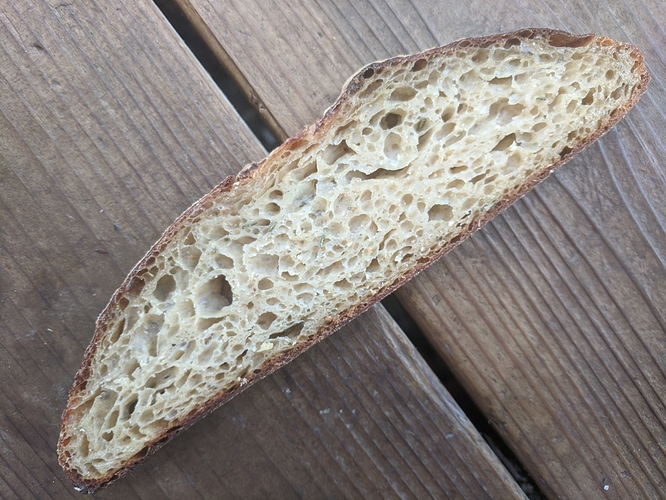 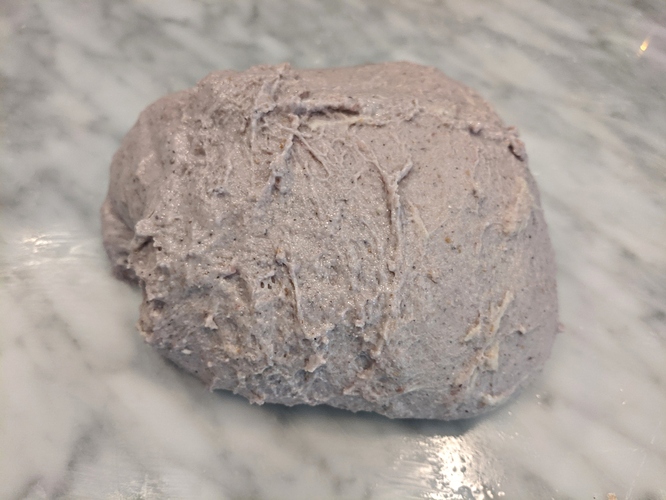 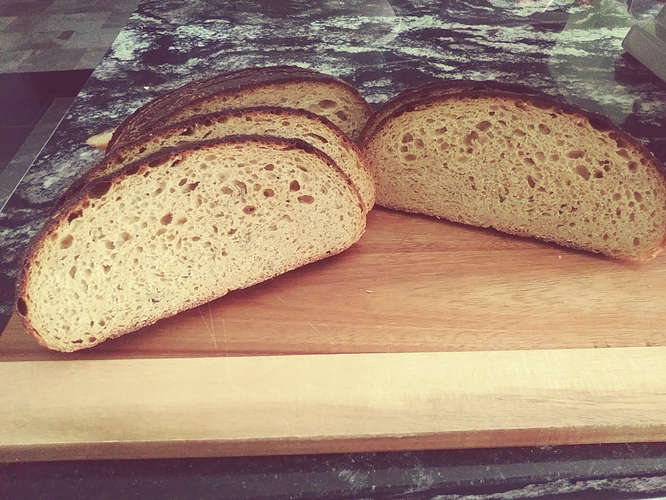 Great timing for this recipe. Had the corn out to make another batch of nixtamal flour and regular corn flour.

I made this bread yesterday. Does have a heavy flavor of rosemary though. My crumb although very good was not custardy and I assume from the combination of flour used.

I used a 50/50 mix of King Arthur Organic Bread flour and home milled whole grain organic hard spring white wheat, along with home milled Dent corn flour. I was not sure how much water was going to be needed as the KA does not absorb much and the whole grain is thirsty. I finalized with 169g of water in the final dough and 140g in the corn. The mix was a touch stickier than my normal sourdough but not by much. After a few S&F’s the dough was very manageable.

After bulk I stretched out the dough to laminate the rosemary in and it was very sticky, needing a lot of extra flour. As this was supposed to be an Artisan style bread all this manipulation pushed out all the entrained bubbles the dough had generated, so the crumb turned out to be more of an enriched style of crumb in my opinion. If laminating the dough was for the purpose of incorporating the rosemary I think next time I will just add it to the mix. I normally make my sourdough using a slightly changed version of Trevor Wilson’s 50% wholegrain which always turns out spot on. Believe next time I will premix (extended autolyse) the flour and add the starter, corn and rosemary and give that a whirl as the gentle manipulation of the dough does open up the holes. As can be seen below the hydration was 79% and was high for my normal sourdough.
Total flour was 430g (including starter)
Total hydration 339 (including starter) or 79%

All in all a great combination for our cookbook. This would go well on Thanksgiving…

BTW Melissa some months ago we spoke about making Nixtamal and I sent you my procedures I used. I said next time I made tortillas I would add hydrated chia seeds to add a little glue to the mix to assist in holding them together and I’d let you know how it worked out. I tried it. WON’T DO IT AGAIN. The pressed tortillas had just enough of a sticky texture they were difficult to remove from the plastic after pressing. WE STILL needed adult beverages (not complaining about this downside though) to get though the process BUT they tasted wonderful.

That is a gorgeous crumb on your first loaf and I can imagine how wet that dough felt just looking at it! I hope dough two (love the color) has turned out well.