I’ve seen many recipes using buckwheat for a sourdough bread. A lot of them have the same principle of naturally fermenting the flour without a starter and baking it within a day or two.

I am making a buckwheat starter and like wheat starters the initial burst of energy happens quite quickly. Mix, keep warm and within a day or two (quicker if conditions are right) it’ll bubble up. However, when it comes to wheat sourdough we nurture it beyond this stage as the initial quick off the mark fermentation is coming from lactic acid bacteria and often with not so friendly bacteria too. The yeasts turn up later or atleast in healthy numbers a few days in. After this initial “fermentation” it generally slows down or goes quiet while a good environment is made for the yeasts to flourish. We don’t make bread with the initial burst of activity and only when it is stable and strong do we bake with it. So far my buckwheat starter showed the quick off the mark fermentation and it’s also following a similar pattern of a quiet stage.

So my questions are…

1: In these buckwheat sourdough recipes are they solely relying on the lactic acid bacteria and possibly the “unfriendly” bacteria too?
2: Why don’t we make all bread this way? (actually there is one made with this technique and that’s salt rising bread but sourdough is never done this way - why not?)
3: Is it worth me making a buckwheat starter if this kind of bread is just as easy with the first fermentation?
4: Can we call them the same type of bread if done with the lactic acid bacteria or with an established starter?

I have to say that the first two feeds the starter was very strong and responsive but just what is going on in this initial stage?

Some breads that use initial/early fermentation include Ethiopian injera (teff), Indian dosas (rice, lentils) and buckwheat bread like this one:

This fermented buckwheat bread is astonishing in its simplicity and its tasty, complex flavors. It makes for a great pre-workout breakfast or snack as it's packed with nutrients yet it feels light on the digestive system compared to a granola bar.

Also fruit yeast water bread… is yeast and used in about 5 days from start.

I’m not sure but I think there’s yeast present from the beginning in the breads listed above…maybe not tremendous amounts? 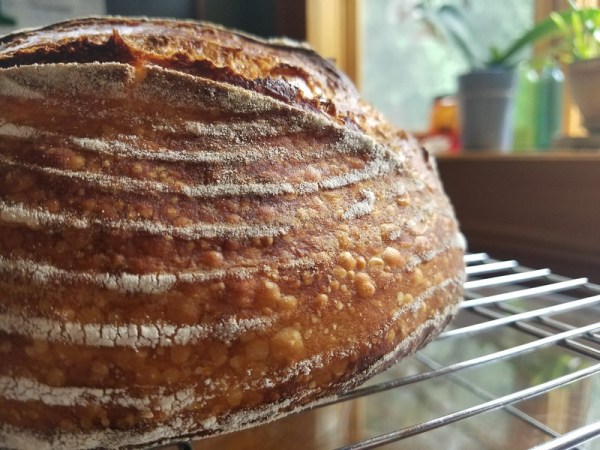 Until a few weeks ago, I didn’t know that the skin of fruit had yeast on it that could be harvested and multiplied, and then used to make bread that has hints of fruit flavor, a tender crumb,…

Thanks for that Melissa.

Yes, I believe there are yeasts present but not like a strong established starter. The first burst of activity can be impressive but it’s the quick off the mark lactic acid bacteria (with some yeast and often bad bacteria too hence the sometimes off smell).

It has just occured to me that with wheat we do wish for a more established strong starter due to the different styles of bread. These non gluten grains are often liquid doughs which can make use of this initial fermentation for a nice loaf. But strong gluten wheat doughs do better with a stronger starter which is healthy in yeasts and bacteria.

P.s. your loaf is what has started me down this route. But i’ve been doing sourdough for so long I automatically wished to create a starter.

I think I see what you’re saying, and maybe that’s evidenced by the more cheeselike aromas that come off of frying doses and injera, but not the buckwheat so much though

Well now that i’m clearer I could have tried your recipe over the weekend. Well i’ve almost established this starter so i’ll carry on and it can serve as my gluten free starter for any gluten free breads I try my hand at. Can’t do any harm.

Your buckwheat loaf does look delicious.