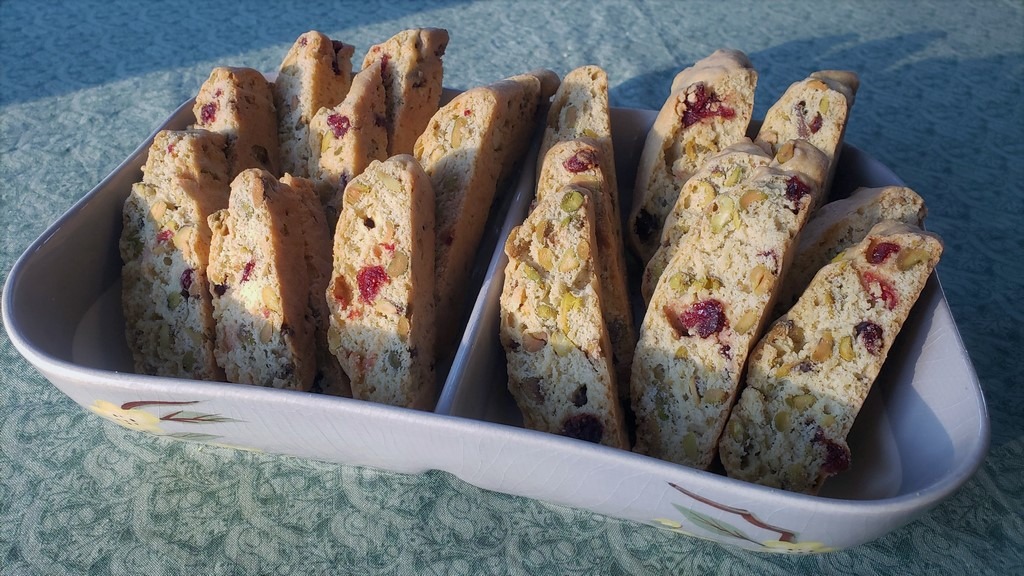 Biscotti are one of my favorite cookies. They're incredibly easy to make and taste so good when homemade with abundant nuts, dried fruit and aromatics.

I love biscotti too! Thanks for sharing this recipe. Do you have any thoughts on other whole grain flours that might work in this recipe?

I suspect that any whole grain wheat flour will work fine. The question is which ones will need a little more liquid and which less. Off the top of my head, you can probably drop the extra water with einkorn, but you might need more with blue emmer. The red wheats would probably be the same as kamut or maybe a little more.

If you find that hydration is fine but the final product is a little crumbly – because of a lack of gluten in the wheat you choose – you could switch to the egg and oil amounts of the gluten-free biscotti recipe and that should bind things up nicely.

I’d love to hear about the wheat you use and the outcome.

Thanks for the advice! I’ll be making biscotti this week, and will post my results.

Your recipe instructions say to “scoop the batter,” but it looks more like a dough in the photo. I’ve made several different recipes but seems I’m adding additional flour for “dough” to hold a log shape. Is the consistency in your photo what I should be aiming for?

I’m sorry for the confusion. It’s not wet like a batter, but it has the sticky-messiness of a batter. (No elasticity.)

I use a rubber spatula to divide what’s in the bowl and lift it half at a time onto the parchment. Then I spread into a log with the same spatula and finally smooth it out with wet fingertips.

It’s amazing how similar/related foods can be over large geographic ranges (likely due to trade routes that are thousands of years old). Similar phenomenon with musical instruments and styles.

I am a biscotti lover, too, and often enjoy a homemade one with a cup of tea. One thing about biscotti recipes has always puzzled me, though. After the first bake, cooling and slicing, the recipe instructions inevitably say to place biscotti “cut side up” on baking sheet for their second bake. Are not BOTH sides cut, as acknowledged in your recipe instructions where you say to put second cut side up.
What I’ve been doing for years (and YEARS!) instead is standing my biscotti up, BOTTOM SIDE DOWN, on the baking sheet for the second bake. This way, both sides of the cookie get their second bake at the same time, reducing the total time I have my oven on and still ending with nicely crunchy biscotti.
Somehow this makes a lot more sense to me, and my biscotti is always enjoyed by friends and family.

That does make sense. I’m guessing you don’t get any burning on the base of the biscotti, so there’s no reason not to try it. Thanks for sharing the tip!

I’ve been baking biscotti and the Jewish version, mandel bread, for many years and I know exactly what you mean. I’ve often done the second bake bottom down, i.e., standing rather than on its side.

I’ve thought a lot (!) about why that’s not the general rule, and I can come up with a few reasons. The purpose of the second bake is mainly to dry out the slice. But I can think of many biscotti I’ve had where the slice also turned golden on the sides, and I think that happens when it’s cut side down. In fact, I have the recipe of a long-deceased aunt who actually took it a step further and put her mandel bread under the broiler (to be watched carefully, I’m sure)! I haven’t tried that yet…

Another thing is, if thinner slices are preferred, it’s hard to stand them up and expect them to stay standing when going in and out of the oven. One thing I’ve done is to put a rack across the rimmed baking pan I use and lay the slices on the side. That way they get the heat from both sides. That’s if I don’t care about the golden thing.

I suppose another reason could be if the first bake gets brown on the bottom, standing up might get them too brown, although I wouldn’t have a problem with that because I like them well done.

Anyway, glad to hear there’s someone else out there who thinks about these things!

Arlo48, I cut my biscotti slices about 1/2” thick, and haven’t had any trouble keeping them upright on the baking sheet as I transfer it to the oven. Also, I place them roughly 3/4” apart, and at that distance the heat from the oven is able to circulate freely and evenly to equally brown all sides.
Your deceased aunt had an interesting idea to brown and crisp under the broiler. I may try that sometime when I know I won’t be called away from the kitchen! It would be a shame to lose some good biscotti by burning it!
And like you, I’m glad to see that there are others out there wondering about why we do what we do when baking.

Why can’t you use extra virgin olive oil in this recipe? Thanks.

It’s just a personal preference of mine for a lighter flavored oil, but there’s no reason not to use it otherwise.