That is a fantastic and fascinating summary! Thank you for doing this.

I was going to say that my rugbrod ferments nicely at cool temps, but then remembered it has yogurt or Kefir milk…so the LAB boost. I’ll be keeping an eye on dough temps this winter when I make my customary rye breads (75% rye for holiday mornings with smoked fish).

I would like to express my delight in finding this wonderful and easy recipe for making Artisan Rye Bread. I am a fan on No-Knead bread baking, but found the master recipe that I use doesn’t really cut it if the dough is left beyond a day or two in the refrigerator. So, I followed Eric’s recipe pretty much to the letter with the following exceptions:
I used 70g of plain bread flour master recipe that was two days old in place of the starter.
I also used 1 tsp of off the shelf, readily available in the supermarket active yeast.
After the mixing phase, the dough went into the refrigerator for 10 hours.
After 10 hours, the dough was left covered on the bench for 10 hours (about 64°F).
Continued with written recipe doing a final proofing of about 50 minutes as the dough was rising nicely and I didn’t want to loose oven spring. Went into a heated at 475°F enamel cast iron pot for 30 minutes (note:didn’t stick to pot) then lowered temp to 410° for 10 minutes. Internal temp was 200°after this time.
The result was a beautifully shaped and well risen loaf. I am really chuffed so will not be shy in trying more of your recipes. Thanks heaps.

Abe, thanks for that link! I love this Artisan Rye but love rye in general. Yesterday after looking at the site, I made the 8 hour quick sponge deli rye. As noted in the recipe, it makes a perfect light deli rye for sandwiches. And 8 hours start to finish, although I did wait until this morning to slice. Great blog for rye lovers!

A nice recipe to start with Liz. Glad you’re enjoying this site dedicated to all things rye. Great baker and wonderful recipes. Have fun working your way through them. Looking forward to seeing some of your bakes on this site.

. I did not add the instant yeast in the recipe and I used my “white” starter. I did not add the commercial yeast as I was confident in my starter and the flours. I noted that yeast is often added and I am not sure why. I will probably take the recipes and adjust to my preferences.

Exactly what I do Liz. Skip the added yeast and rely solely on my sourdough starter. They workout just as well. You’ve gotta give the famous Borodinsky bread a try. Can you get hold of red rye malt?

Good to hear, Abe (no yeast). I looked up red rye malt and looks like I can get it as it is a beer making thing also. Worse case, I found a recipe to make it from berries. So Borodinsky goes on my LONG list of things to try!

Exactly what I did. Couldn’t find any Red Rye Malt so went online to a brewing company and bought the next best thing - Crystal Rye Malt. It’s so similar it looks identical to Red Rye Malt when ground. 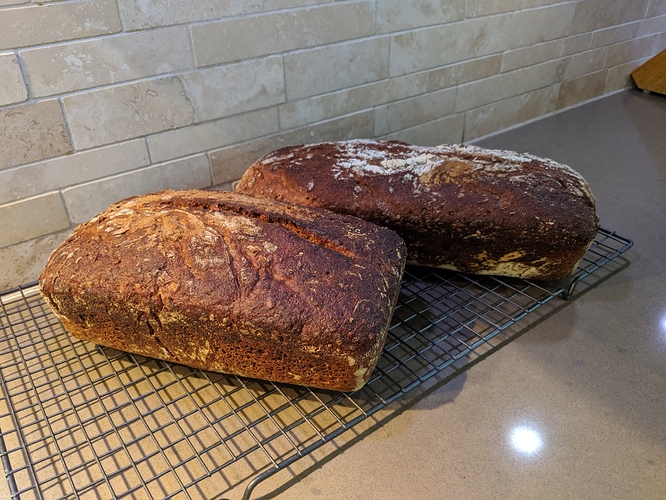 0761A0CA-7CB2-4C6F-B769-C895103BE7C9.jpeg2048×1536 968 KB
This bread has become a part of my bread baking repertoire for a couple of years now. Over time I have found a way that suits our tastes best. First I double the amount, make it a tad less sticky by adding a bit more bread flour. I use the bread flour with added multigrain. I double the spice weight with an additional 8g of coriander and grind half of it. Add 100g of roasted sunflower seeds. I use my own sour dough starter. I follow the recipe until it comes to the rise the next day. I prepare two non stick bread pans and split the dough among them. Cover and let them rise for 1 1/2 hour, cut the dough with a razor and then bake at 475 convection covered with alu foil for 25 min, remove the foil and bake until it reaches 200F inside temp. It forms a strong crust and tastes absolutely delicious. It has a distinct European flavour which we had missed here for far too long. Thanks for a great recipe!
easummers (Liz) October 31, 2019, 12:34pm #171

Thanks for sharing your modifications and the “loaf” technique. Your loaves look wonderful!

This is one of my favorite recipes also and I was just thinking to increase volume and bake in my Breadtopia oblong clay baker which makes a long, but loaf shape (vs batard or boule). I find myself going back to loaf shape often as it works well for the size sandwich’s and toast I like!

OK mixed it all up in the Kitchen Aid Friday afternoon, gave it two more 2-3 minute mix sessions after the initial mix, adding a bit more rye flour each time until the dough firmed up and began pulling away from the bowl. Knew I wasn’t going to get to bake it today it’s still in the refrigerator, I’ll take it out before bed and hopefully the long hibernation it the cold will have no ill effects. The dough smells amazing and I added two tablespoons of cocoa powder to get a dark color, looking at the dough it’s definitely dark, we’ll see how it bakes up tomorrow after a long chill.

This is hands down THE BEST Rye bread I’ve ever tasted!!! I’m a year into sourdough baking (at home). I’ve been experimenting with different recipes and this is now my fave to work with and eat!!! Thank you for this brilliant recipe!!! My crumb, scoring and bloom need more practice but I don’t mind eating my mistakes​:stuck_out_tongue_winking_eye:

Looks awesome to me!

I had great success with your recipe. Thank you for sharing! Has anyone had any luck freezing one of these loaves? I would like to bake a few ahead of time.
Thanks, Carrie

@cderuytt, I freeze breads all the time, but I slice them first and place the slices into a freezer Ziploc-type bag. I just toast up my slices when I want to eat my bread. I have never frozen a whole unsliced loaf though.

Can this be done using whole wheat flour? Will there be any significant changes?

Probably. Can’t harm trying and i’m sure you’ll get something nice out of it. Might take a bit of trial and error though. First thing that would have to be changed is the hydration. If you need any guidance on how i’d tackle this recipe using wholewheat instead of rye just let me know.

I’d love some guidance! I’m a total newbie bread baker. I’m trying the recipe right now with a 1:1 replacement of whole wheat but I’m curious what you would do.