This time it’s about using more or less starter for more flavour.

No doubt you’ve come across the “sourdough paradox” that for more flavour, in your final loaf, one actually needs less starter/levain and increase of the final dough ferment time for a more flavoursome loaf. Plus one can refrigerate the final proof for an even better flavour.

What say you? What is your experience?

I think a higher starter/levain percentage which has been fermented to a point of maturity where the starter itself is more flavoursome [here is where a levain plays an important part as it’s this stage where one is nurturing the final outcome of the bread, just like a poolish or a biga, and where one can stretch the ferment beyond the boundaries of the final dough] and all done in warm temperatures will make the best bread. The fridge is more about convenience.

You can have a levain build of 1:5:5 and allow it to mature for 12-14 hours. It can triple or more. You can even catch it when it just begins to recede. And I’m also of the opinion you still have more time to use it as this is also “starter convention”.

However if the levain in the final dough is the same percentage one wouldn’t allow it to go that far. Often we stop the bulk ferment at 30-50% and maximum will be doubled but often this will be too much and won’t produce the best loaf. And 20% levain in a loaf will hardly ever be 12-14 hours whereas many recipes with the same percentage of starter in the levain call for a long ferment but then shorten the final dough time.

I think concentrating on the levain for flavour will produce a better bread than simply using less starter in a dough because you aren’t constrained by time as much and working towards a structured dough which will produced a tall loaf with a nice crumb.

With both allow the dough to bulk ferment till the same extent. Then carry on as normal and bake when ready. All done at room temperature.

To some up simply - I think one can allow a levain to ferment to a stage where enough lactic acid is produced for a more complex flavour but not so in the final loaf. So it doesn’t matter using a small amount of starter/levain in the final dough and increasing the ferment time because you can’t stretch it to the same stage where its produced that lovely flavour. Whereas using more levain and then strengthening it up when adding the rest if the flour, even though this means less ferment time at the final dough stage, will make a better loaf.

Interesting experiment! I’ll give it a try this weekend. Tell me if I’ve got this correct.

Off the cuff, I’d say my “no discard” starter management approach puts my bread in category 2 most of the time. I use extra starter in order to have small amount to feed and refrigerate again.

But about a quarter of the time, I use less starter or refrigerate the dough early to get a long bulk fermentation.

I’m not picking up on big flavor differences between those approaches (except 3+ day cold pizza dough is more sour) but I think that’s because I use different wheat varieties in different amounts at almost every bake. The different wheat flavors take a front seat.

My theory is that putting greater emphasis on the flavour of the preferment and using a higher percentage of preferment will result in a better tasting bread. Just a theory at the moment mind you

Reasoning behind this is because the more mature a starter or levain is the higher the lactic acid. We can ferment a starter or levain beyond what a final dough can be fermented to. So flavour is primarily in the preferment and while the final dough stage does produce some of the flavour it can’t be fermented as much without compromising structure and oven spring etc. Because the point where the lactic acid is being produced the strongest is at the over fermenting/proofing stage for a dough!

I’m getting far better flavour using Hamelman’s approach for his sourdoughs , which is similar to the 1:5:5 levain build and a high percentage, than using 10% starter.

P.s. you could do one preferment build of 1:5:5 and make enough for both experiments side-by-side. That way its even more controlled.

Good point about combining the preferment builds. And I’ll try to get the doughs mixed up early in the morning, so that I don’t find myself wanting to go to bed with the low inoculation dough not done bulking.

Very interesting topic, I’ll be following this to see how your experiment turns out Melissa.

@Bentio @Abe
I’m a day off my original plan, and will build the levain tonight. 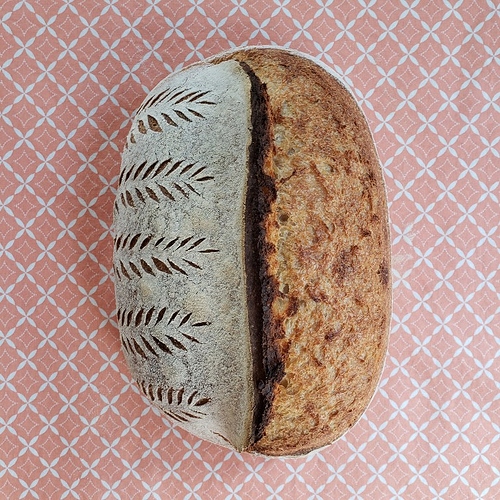 Beautiful loaf, Melissa. Love the stencilling. What recipe is it?

I’m convinced that my theory is correct. Although not a controlled experiment my last loaf was a few grams of starter and very long ferment. Taste nice enough but nothing special. Yesterday’s loaf was Hamelman’s 5 grain levain (which is one of my all time favourites, it’s in his book “bread”, I do it as a 100% sourdough even though the recipe has a touch of yeast but it’s optional). It has a very high percentage of a well fermented levain. Just two hours bulk ferment and one hour final proof. Taste is superb. Yes it has a lot of additions but it’s not just that - the tang shines through.

Thanks! Here’s the formula. It was very off the cuff, and actually triple this amount to make two gift-breads and one for my family.

I don’t know why I initially made it so dry, but I brought it from 68% to at least 73% h2o by pouring water in during each stretch and fold.

250g bread flour
250g einkorn and hard white (no idea the ratio, was emptying a bag)
340g water + plus a lot added during stretching and folding
33g starter
2 tsp salt

Here’s a pre-bake shot and a crumb shot.

I’m delaying the experiment one more day! We celebrated our new ability to do curbside pickup of restaurant food yesterday and thus ate little bread.

(This salad was homemade, though. The restaurant food involved french fries

and other things I don’t make well at home.) 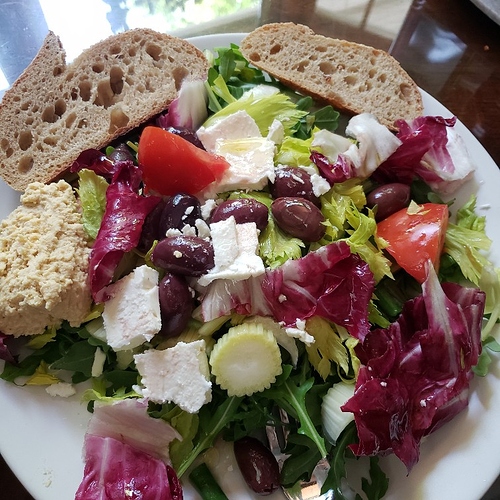 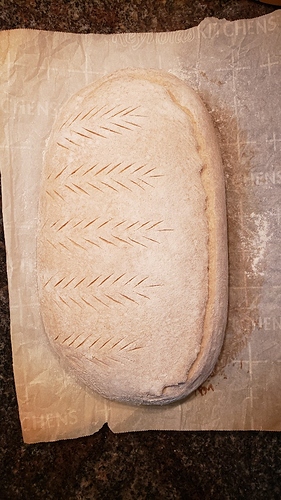 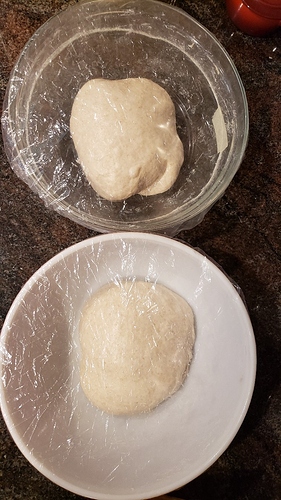 Sending you the original recipe which is by Hamelman from his book “Bread”. It is so good, well worth you trying it out. I’m sure you’ll love it.

I’ll start by saying that anyone looking to up their fermentation-observation game should make a go at building two doughs with staggered fermentation - whether because of different water temp, inoculation, or something else - and then try to perform each transition (end bulk fermentation, shape, end final proof) at the same stage in dough development. It’s not easy!

Photos from levain development and mixing 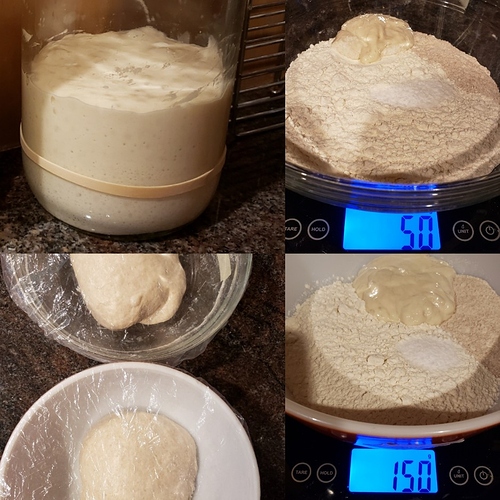 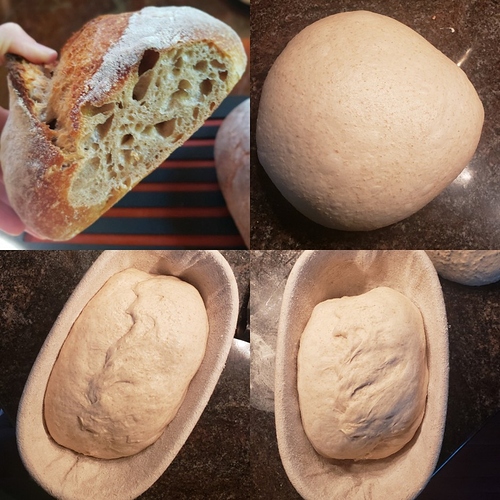 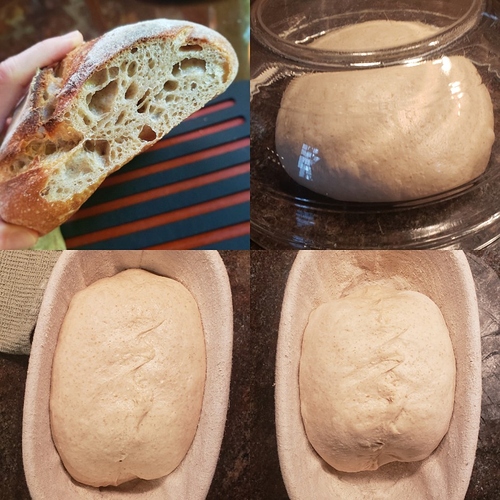 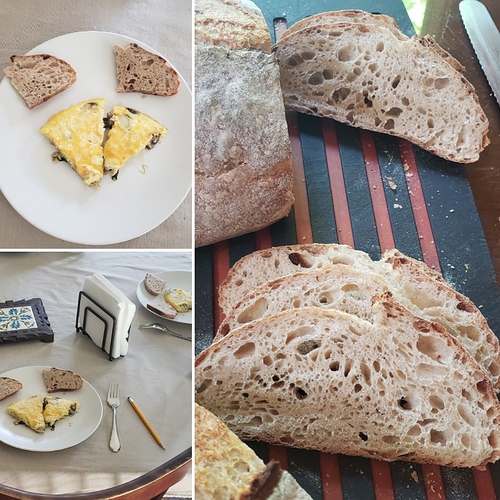 We love both loaves and I suspect they’ll be gone by tomorrow evening. It is interesting to me 1) how close together they ended up being ready to bake and 2) the presence of a sour/sweetness difference, especially since the levain was “fresh” compared with how I usually bake: a lot of starter that is 1:1:1 fed.

I’d like to try this with a bigger spread in inoculation percentage, maybe 5% and 35%.

That is a very good right write up Melissa and an experiment well thought out. Both breads look lovely but I think I’m leaning towards the 15% for a slightly better crumb. Interesting that the 5% is chewier with a softer flavour. And I like the other taste reports given like the 15% being more bready with a stronger grain taste.

I think this was a success in helping understand how the levain can be used for the final results without it just being thought of as a leavener and the final dough being the place where we coax out the flavour. It also puts to rest the less is more when it comes to starter or levain. Well certainly when it comes to tang! If one wishes a more mellow sourdough then more is less it seems.

Thank you for your hard work and time. Enjoy the loaves!

It was fun to try to test that one variable – I tend to think it’s impossible to not add unintended elements to these experiments, but it IS worthwhile to try.
Also great to get the family involved in taste testing.
Thanks for the idea!

This seems similar to the idea of a pâte fermentée – basically, making a large portion (up to half) of the dough ahead of time, but w/sourdough starter instead of yeast, and letting that develop flavor slowly over a day or two before the final dough. Though pâte fermentée typically includes salt, unlike a poolish. I haven’t used a biga before.

Yes, exactly like a poolish, biga or pate fermente makes a yeasted bread more flavoursome the secret to a more flavoursome sourdough is in the levain contrary to the popular belief that less starter and more time for the final dough makes for a tastier loaf. So the idea is to cultivate the lactic acid in the levain and use a higher percentage rather than trying to get the same results purely at the dough stage.

I used a kinda-sorta similar approach to make sourdough baguettes a few days ago that were San Francisco Bay Area sour – delicious.

These experimental bakes you did Melissa are so helpful to us all and really make sense. It is logical to me that using more prefermented flour should bring more flavour to the finished loaf since they bring more pre-existing flavour components to the final loaf from the start.
Thanks so much for doing the experience today and sharing them with us and thanks Abe for starting this post.
Benny